No, that’s not the Onion. That’s for real. NR is earnestly begging Republicans not to try to actually govern the country:

The desire to prove Republicans can govern also makes them hostage to their opponents in the Democratic party and the media. It empowers Senator Harry Reid, whose dethroning was in large measure the point of the election. If Republicans proclaim that they have to govern now that they run Congress, they maximize the incentive for the Democrats to filibuster everything they can — and for 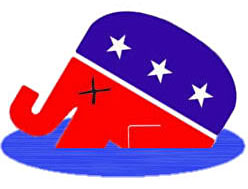 President Obama to veto the remainder. Then the Democrats will explain that the Republicans are too extreme to get anything done.

I wonder if NR’s editors have enough of a sense of humor left to be embarrassed by this? After all, this is precisely what Republicans have been doing to Democrats for six years: obstructing everything imaginable and then snickering as Dems helplessly try to explain to voters that Washington gridlock isn’t their fault, it’s the fault of that mean Mitch McConnell. Clearly NR understands how well this worked and wants to protect Republicans from having their own playbook used against them.

Beyond that, NR is afraid that trying to govern will just upset one faction or another in the GOP’s delicately balanced coalition, and that makes no sense. Who needs a bunch of crazy tea partiers stirring up trouble again? There’s no reasoning with those folks! Better to just lie low.

As cynical political strategy, it’s hard to argue with the logic here. Republicans probably are better off doing nothing for the next two years except mocking President Obama and throwing out occasional symbolic bits of red meat to keep the rubes at bay. Usually, though, this is the kind of thing you talk about quietly behind closed doors. It’s a little surprising that we’ve gotten to the point where apparently this level of cynicism is so routine that no one thinks twice about spelling it out in public in explicit detail. Welcome to modern politics.