We all learned recently that sandwich shop Jimmy John’s forces its workers to sign a noncompete agreement before they’re hired. This has prompted a lengthy round of blogospheric mockery, and rightfully so. But here’s the most interesting question about this whole affair: What’s the point?

Laws vary from state to state, but generally speaking a noncompete agreement can’t be required just for the hell of it. It has to protect trade secrets or critical business interests. The former makes them common in the software business, and the latter makes them common in businesses where clients become attached to specific employees (doctors, lawyers, agents) who are 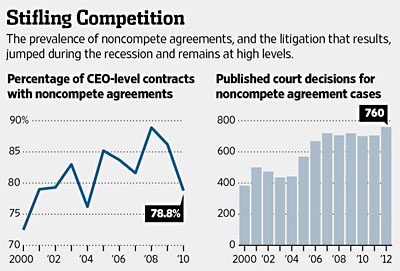 likely to take them with them if they move to a new practice. But none of this seems to apply to a sandwich shop. Clare O’Connor of Forbes asked an attorney about this:

“There’s never a guarantee, but I can’t see any court in the world upholding this,” said Sherrie Voyles, a partner at Chicago firm Jacobs, Burns, Orlove & Hernandez. “Every state law is different on this issue, but the general idea is that it’d only be upheld if it’s reasonable. The test would be, is there a near-permanent customer base? No. Customers at Jimmy John’s are probably also customers at Subway.”

Voyles said she can’t imagine any Jimmy John’s outlet actually enforcing this non-compete clause (indeed, there’s no evidence any have tried), but can’t see any reason it’d hold up in court. “It’s not the kind of interest protected by law,” she said.

The Wall Street Journal nonetheless reports that litigation over noncompete clauses has risen over the past few years, but this appears to be mostly in places like the software industry, where trade secrets are important. Not so much in the fast food business.

So again: what’s the point? I’ve not heard of a single case of Jimmy John’s actually taking someone to court over this, and it seems vanishingly unlikely that they would. That seems to leave a couple of options. First, it’s just boilerplate language they don’t really care about but left in just in case. The second is that they find it useful as a coercive threat. Sure, they’ll never bother going to court, but maybe their workers don’t know that—which means they’re less likely to move across the street to take a higher-paying job. In other words, it’s a handy tool for keeping workers scared and wages low.

So it’s either stupid or scummy. Take your pick.

UPDATE: Stephen Bainbridge, who actually knows what he’s talking about, agrees that a noncompete clause like this is pretty much legally useless. But he quotes Cynthia Estlund explaining why it might have value anyway:

Even a manifestly invalid non-compete may have in terrorem value against an employee without counsel.

In terrorem? Lawyers actually use this phrase? I guess it gets the point across, doesn’t it?