The PATRIOT Act gave federal agents expanded powers to issue search warrants without informing the targets of the warrant beforehand. Why? Because terrorism investigations were special: they’d fall apart if terrorists received warning that they were being investigated. So with terrorism suddenly a far bigger priority after 9/11, 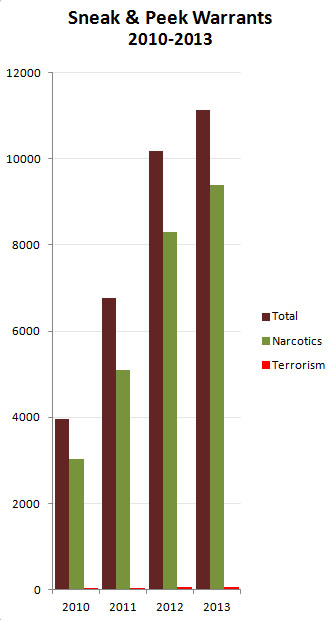 national security required that authority for these “sneak-and-peek” warrants be broadened.

A few days ago, the Electronic Frontier Foundation tallied up the known figures for sneak-and-peek warrants:

That’s quite an increase. So did terrorism investigations skyrocket over the past decade? Not so much. It turns out that hardly any of these warrants were used in terrorism cases. Instead, they were virtually all used in narcotics cases—as the chart on the right shows. Radley Balko draws the right lessons from this:

There’s no reason laws like this can’t be drawn properly in the first place. Sure, some terrorism cases involve narcotics, but that’s a poor excuse. If terrorism is genuinely involved, law enforcement officers have plenty of opportunity to convince a judge of that. A properly-constructed statute won’t get in their way.

This goes for the NSA as well as the FBI, by the way. If they need broadened surveillance powers to fight terrorism—and perhaps they do—a narrowly-drawn statute won’t hurt them. If they object to this, every one of us should wonder why.