Here’s a stunning chart for you. It comes from a paper by a team of Swedish researchers, and it shows the relationship between earnings and weight among men. As you can see, adult earnings reach a peak around a 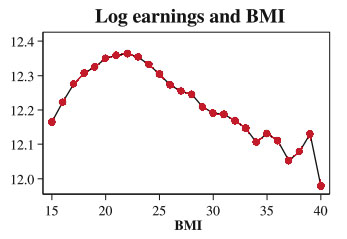 BMI of 23—smack in the middle of the normal weight range—and then steadily decline as you get more overweight. But here’s the kicker:

In particular, we contribute to the existing literature by showing that there is a large labor market weight-related penalty also for males, but only for those who were already overweight or obese in adolescence. We replicated this pattern using additional data sets from the United Kingdom and the United States, where the results were strikingly similar. The UK and U.S. estimates also confirm that the penalty is unique to those who were overweight or obese early in life.

At first glance, a sceptic might be unconvinced by the results. After all, within countries the poorest people tend to be the fattest….But the authors get around this problem by mainly focusing on brothers….They also include important family characteristics like the parents’ income. All this statistical trickery allows the economists to isolate the effect of obesity on earnings.

So what does explain the “obesity penalty”? They reckon that discrimination in the labour market is not that important. Neither is health. Instead they emphasise what psychologists call “noncognitive factors”—motivation, popularity and the like. Having well-developed noncognitive factors is associated with success in the labour market. The authors argue that obese children pick up fewer noncognitive skills—they are less likely, say, to be members of sports teams or they may face discrimination from teachers.

In other words, social ostracism of both underweight and overweight teenagers produces lower cognitive skills and lower noncognitive (i.e., social) skills, and this in turn leads to lower earnings as adults. It may seem like harmless teenage clique behavior, but it has real consequences.