Yesterday the Bureau of Justice Statistics released the latest numbers on incarceration rates, and the headline news is that we’re sending fewer people to prison. But there’s an interesting wrinkle in the numbers that few news outlets have picked up on, even though it’s a trend that’s been obvious in the numbers for a long time. Here it is: 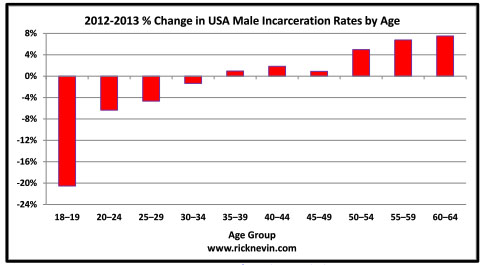 That’s from Rick Nevin, and you know what’s coming next, don’t you? Lead. It explains a lot of what’s going on here.

The US started phasing out gasoline lead in 1975, which means that children born after 1975 were exposed to steadily less lead. And the effect was cumulative: the later they were born, the less lead they were exposed to and the less crime they committed when they grew up. However, children born before 1975 were unaffected by all this. They were born in a high-lead era, and since all that matters is exposure during early childhood, the damage had already been done.

In 2013, this means that the statistics show a reduction in crime rates in adults under the age of 40, and the younger the cohort the lower the crime rate. Unsurprisingly, this also means they’re incarcerated at lower rates. The chart above shows this fairly dramatically.

But it also shows that incarceration rates have stayed steady or increased for older men. Those over the age of 40 had their lives ruined by lead when they were children, and the effect was permanent. They’re still committing crimes and being sent to prison at the same rate as ever. It’s hard to explain both these trends—lower prison rates for kids, higher prison rates for the middle-aged—without taking lead into account.

This is one of the reasons that the lead-crime hypothesis is important. In one sense, it’s little more than a historical curio. It explains the rise and fall of crime between 1960 and 2010, but by now most environmental lead has been cleaned up and there’s only a limited amount left to worry about. So it’s interesting, but nothing more.

But here’s why it matters: if the hypothesis is true, it means that violent crime rates aren’t down because of transient factors like drug use or poverty or harsh penal codes. The reduction is permanent. Our children are just flatly less violent than the lead-addled kids who grew up in the years after World War II. And that in turn means that the decline in incarceration rates is permanent. We don’t need as much prison space as we used to, and we don’t need punitive penal codes designed to toss kids behind bars for 20 years at the first sign of danger.

In other words, we can ease up. Our kids are less violent and our streets are less dangerous. Nor is that likely to change. The lead is mostly gone, and it’s going to stay gone. We’re safer today not because of broken windows or three-strikes laws or 20-year sentences for dealing cocaine. We’re safer because we’re no longer poisoning our children in ways that turn them into hair-trigger thugs. And guess what? If we cleaned up the ambient lead that still remains, we’d be even safer 20 years from now.