The Census Bureau released its annual poverty report today, and the headline number shows that the official poverty rate declined from 15.0 percent to 14.5 percent. This decline was driven entirely by a drop in the number of children living in poverty.

This gives me an excuse to make a point that doesn’t get made often enough. You’ll often see charts showing that the overall poverty rate has remained roughly the same since the late 60s, and that’s true. But this is largely due to more generous Social Security benefits, which have reduced elderly poverty from over 30 percent to under 10 percent.

There’s been no such reduction among working age adults. In fact, just the opposite. The low point for working-age poverty was about 9 percent, reached in 1968, and since then it’s steadily increased. There are small variations from year to year, but basically it went up to about 10-11 percent in the 80s and then increased to 13.6 percent during the Great Recession. It’s stayed there ever since.

The safety net has helped most of these folks tread water, but it doesn’t change the fact that the market economy has gotten steadily bleaker for the poor over the past 40 years. It’s great that we’ve made such significant inroads against elderly poverty, but aggregates can fool you about the rest of the country. Among everyone else, poverty has only gotten worse and worse. 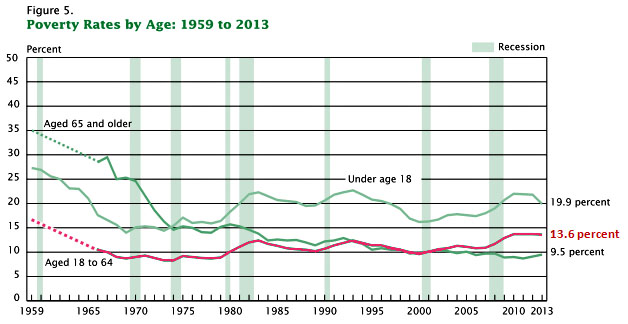