Russell Gold writes in the Wall Street Journal that perhaps the idea of peak oil is a myth. After all, technology keeps getting better and better, allowing us to extract more oil from old fields. Of course, it’s expensive to do business this way:

When the oil industry overcomes an obstacle and boosts oil production, costs typically increase. That opens the door for a better and cheaper energy source that will eventually displace crude oil.

So at some point, the cost of getting more and more oil likely will get so high that buyers can’t—or won’t—pay….Already, economics is bringing about some changes. Despite the abundance of oil that fracking has delivered, global oil prices remain high. This has kept the door wide open for alternative sources of energy and spending on energy efficiency.

….”There will be peak oil, but it will be [because of] peak consumption,” says Michael Shellenberger, president of the Breakthrough Institute, an energy and climate think tank in Oakland, Calif. “What we all want is to move to better, cheaper and cleaner sources of energy.”

This is a good example of a common misconception about peak oil. The theory has never really been about the absolute limit of oil in the ground—though, of course, there is an eventual limit—it’s been about the amount of oil that can be profitably extracted. Older fields, where you literally just have to drill a hole in the ground and wait for a gusher, are cheap fields. As the older fields play out, we have to use new technology to extend their lives. And we also have to look for oil in other, more expensive places: polar oil, deep-sea oil, tar sands, and so forth. As we do this, oil gets more and more expensive.

There’s nothing new about this. The peak oil debate has never really been about how much oil is in the ground. It’s always been about (a) how much oil we can pump on a daily basis and (b) how much it costs to get it above ground. And as Gold points out, even with all the hoopla about fracking, the price of oil is still very high. That’s because new technologies are barely keeping up with the exhaustion of older fields.

But there’s more to this. It’s true, of course, that as oil gets more expensive it naturally motivates a switch to other energy sources. In that sense, peak oil takes care of itself. We’ll switch to gas, and then to solar, and maybe 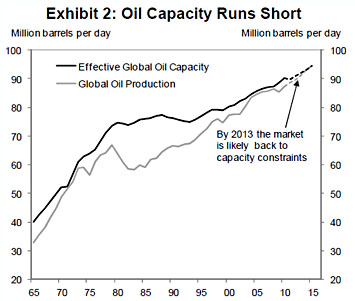 someday to fusion. And we’ll do it naturally as those sources of energy become cheaper than oil.

In the meantime, however, there’s a big problem: declining spare capacity. The real medium-term danger of peak oil lies in the fact that the world is currently pumping oil at close to full capacity. Nor is this likely to change soon, since the developing world has a huge appetite for oil even at current prices. So what happens when there’s a supply disruption somewhere? The answer, unfortunately, is that any blip in supply, whether from political unrest, terrorism, or merely unforeseen natural events, can cause prices to carom wildly. A world with $100 per barrel oil is bad enough, but a world in which a single pipeline meltdown could cause prices to skyrocket to $300 per barrel for a few months and then back down is far worse.

Will this happen? No one knows. Iraq has more pumping capacity if they can solve their political problems. Iran has more pumping capacity if they can make a nuclear deal with the West and re-enter the global market. Fracking is still on the rise, and probably will be for the rest of the decade. But oil prices spiked even during the Libya war, and that was a pretty modest supply disruption.

In other words, no one knows for sure. I certainly don’t. But the fact that demand is bumping up against supply—and will continue doing so even if supply increases—represents the real danger, economically speaking. With no spare capacity, a modest disruption in supply can cause oil prices to spike, and there’s a lot of evidence to suggest that oil price spikes are at least partially responsible for every global recession of the past 40 years. That’s peak oil for you.