The central bank said that in October it would begin buying asset-backed securities, bundles of loans issued by banks to businesses and households….Perhaps more significantly, Mr. Draghi said that the central bank’s governing council was ready to take further measures if needed — a clear reference to quantitative easing, or broad-based purchases of government bonds or other assets. 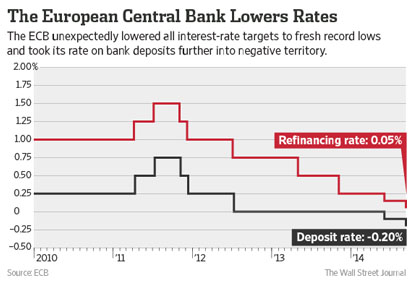 of the governing council favored starting such purchases, but others did not.

More from the Wall Street Journal:

While the ECB had in recent months indicated it was considering an ABS purchase program, the addition of a covered bond program and rate cuts was a surprise, and an indication that officials have grown increasingly concerned that the recent period of very low inflation could persist longer than first thought and may threaten the currency area’s economic recovery.

“In August, we see a worsening of the medium-term inflation outlook, a downward movement in all indicators of inflation expectations,” Mr. Draghi said. “Most, if not all, the data we got in August on GDP (gross domestic product) and inflation showed that the recovery was losing momentum.”

It’s still too little, too late—as usual with the ECB—but at least it suggests that European leaders are finally taking seriously the combination of low inflation and lousy economic growth in the eurozone. More please.