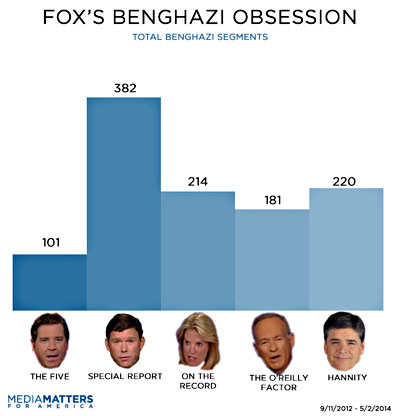 The good folks at Media Matters have taken on the soul-crushing task of tallying up coverage of Benghazi on Fox’s prime-time evening shows, and they report that Fox has aired nearly 1,100 segments in the 20 months since the attacks. In a bit of a shocking upset, the winner of the obsession war wasn’t heavy favorite Sean Hannity, but the normally more mild-mannered Bret Baier.

However, don’t count Hannity out quite yet. By far, the stupidest Benghazi talking point has been the endless “stand down” infatuation—the notion that rescuers were available but someone in the White House deliberately ordered them not to go in. This is stupid not just because it’s been debunked over and over and over, but also because it makes no sense. Even if Obama hates America, why would he do this? It’s political suicide.

Anyway, guess who’s spent the most time on the stand down order? That’s right: Sean Hannity, by a huge margin. Hannity might not have won the overall obsession crown, but he certainly won the special award for pandering idiocy.

As you’d expect, coverage was heaviest just after the Benghazi attacks in 2012, but even after that initial flurry Fox has kept up a steady drumbeat of 20-30 Benghazi segments each and every month. It makes me wish I could figure out an anti-Obama angle for my obsession with lead and crime. These guys would be the greatest allies ever. I need to put my thinking cap on.