Jeffrey Goldberg’s interview with Hillary Clinton is being taken as an effort by Hillary to distance herself from President Obama. Here’s the most frequently quoted snippet:

….JG: What is your organizing principle, then?

HRC: Peace, progress, and prosperity. This worked for a very long time. Take prosperity. That’s a huge domestic challenge for us. If we don’t restore the American dream for Americans, then you can forget about any kind of continuing leadership in the world. Americans deserve to feel 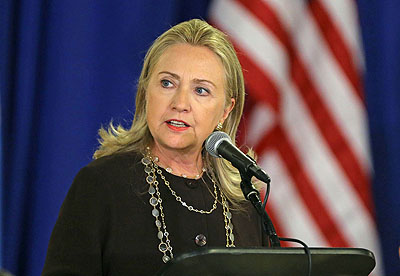 secure in their own lives, in their own middle-class aspirations, before you go to them and say, “We’re going to have to enforce navigable sea lanes in the South China Sea.”

I’ve seen the first part of this excerpt several times, and each time I’ve wondered, “So what’s your organizing principle.” When I finally got around to reading the interview, I discovered that this was Goldberg’s very next question. And guess what? Hillary doesn’t have one.

It so happens that I think “don’t do stupid stuff” is a pretty good approach to foreign policy at the moment. It’s underrated in most of life, in fact, while “doctrines” are mostly straitjackets that force you to fight the last war over and over and over. The fact that Hillary Clinton (a) brushes this off and (b) declines to say what her foreign policy would be based on—well, it frankly scares me. My read of all this is that Hillary is itching to outline a much more aggressive foreign policy but doesn’t think she can quite get away with it yet. She figures she needs to distance herself from Obama slowly, and she needs to wait for the American public to give her an opportunity. My guess is that any crisis will do that happens to pop up in 2015.

I don’t have any problems with Hillary’s domestic policy. I’ve never believed that she “understood” the Republican party better than Obama and therefore would have gotten more done if she’d won in 2008, but I don’t think she would have gotten any less done either. It’s close to a wash. But in foreign policy, I continually find myself wondering just where she stands. I suspect that she still chafes at being forced to repudiate her vote for the Iraq war—and largely losing to Obama because of it. I wouldn’t be surprised if she still believes that vote was the right thing to do, nor would I be surprised if her foreign policy turned out to be considerably more interventionist than either Bill’s or Obama’s.

But I don’t know for sure. And I probably never will unless she gets elected in 2016 and we get to find out.