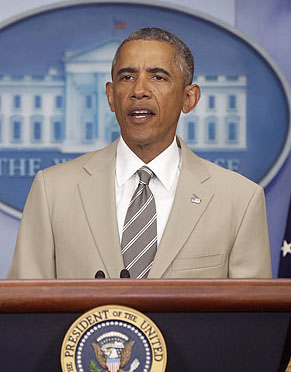 From President Obama, asked if he needs congressional approval to go into Syria:

I don’t want to put the cart before the horse. We don’t have a strategy yet.

That’s not going to go over well, is it? Three years after the Syrian civil war started and (at least) half a year after ISIS became a serious threat in Iraq, you’d think the president might be willing to essay a few broad thoughts about how we should respond.

Don’t get me wrong. I think I understand what Obama is doing here. He’s basically trying to avoid saying that we do have a strategy, and the strategy is to do the absolute minimum possible in service of a few very limited objectives. And generally speaking, I happen to agree that this is probably the least worst option available to us. Still, there’s no question that it’s not very inspiring. You’d think the brain trust in the White House would have given a little more thought to how this could be presented in a tolerably coherent and decisive way.

In the meantime, “We don’t have a strategy yet” is about to become the latest 24/7 cable news loop. Sigh.

Oh, and the tan suit too. It’s quite the topic of conversation in the Twittersphere.