Here’s the latest news on Obamacare from the Kaiser Family Foundation: it suddenly became a lot more unpopular in July: 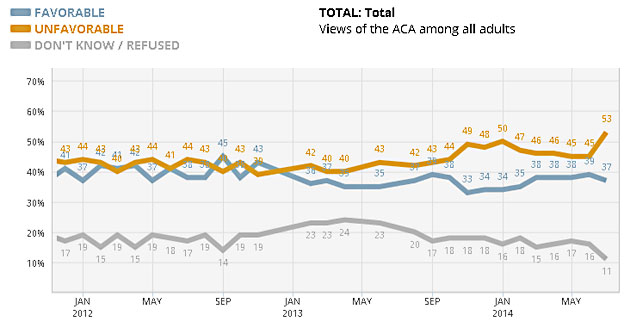 So what happened? I can’t think of any substantive news that was anything but good, so I figure it must have been the Hobby Lobby decision. Did that turn people against Obamacare because they disapproved of the decision? Or because it reminded them that Obamacare pays for contraceptives? Or what? It’s a mystery, all the more so because every single demographic group showed the same spike. Democrats, Republicans, and Independents all spiked negative. The rich and the poor spiked negative. The young and the old spiked negative. Ditto for men, women, whites, blacks, and Hispanics. It’s a little hard to figure out why the Hobby Lobby decision would have affected everyone the same way, but I can’t think of anything else that happened over the past month that could have caused this. It certainly wasn’t John Boehner’s lawsuit, and I very much doubt it was the Halbig decision.

So it’s a bit of a puzzler—though perhaps another chart explains it. It turns out that in conversations with family and friends, people have heard bad things about Obamacare more than good things by a margin of 27-6 percent. Likewise, they’ve seen more negative ads than positive by a margin of 19-7 percent. Roughly speaking, the forces opposed to Obamacare continue to be louder and more passionate than the forces that support it. I don’t think that’s actually changed much recently, so it probably doesn’t explain the sudden spike in July’s polling. But it might explain part of it.

Or, it might just be a statistical blip. Who knows?