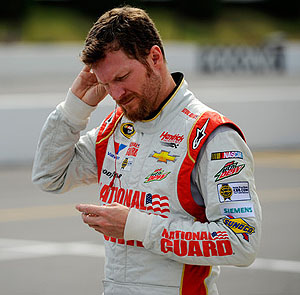 Dale Earnhardt Jr. is having a great year on the NASCAR circuit this year, but the National Guard is dumping him as a sponsor anyway. They say the reason is “significantly constrained resources.” What does that mean?

The “significantly constrained resources” may be due to Senate hearings on the Guard’s profligate spending convened earlier this year. USA Today reported the Guard spent $26.5 million to sponsor NASCAR in 2012, “but failed to sign up a single new soldier to its ranks,” according to Senate documents. Between 2011 and 2013, the Guard spent $88 million, but “it is unclear how many new recruits, if any, signed up because of it.”

Wait. What? Not a single recruit? Let’s go to the tape. Here’s the original USA Today piece:

The Guard received 24,800 recruiting prospects from the program in 2012, documents show. In those cases, potential recruits indicated the NASCAR affiliation prompted them to seek more information about joining. Of that group, only 20 met the Guard’s qualifications for entry into the service, and not one of them joined.

In 2013, the number of prospects associated with NASCAR dropped to 7,500, according to briefing materials for the Senate subcommittee on Financial and Contracting Oversight led by McCaskill. The National Guard needs 1 million leads to meet its annual recruiting goal of 50,000 soldiers.

Wow. Out of 24,800 prospects, only 20 even met the Guard’s qualifications. There are obviously some ripe pickings here for jokes about NASCAR fans, but if I make any of them I’ll undoubtedly be accused of latte-sipping elitism. But surely someone will step up to the plate?

In any case, the core problem, apparently, is that the NASCAR audience is just too damn old. Sort of like Fox News. That’s why the Army ditched them for drag racing:

Army analysis found better value in producing “leads,” prospective recruits, by sponsoring National Hot Rod Association (NHRA) events, including drag racing. “Currently, only 5% of the NASCAR audience is made up of 18-24 year old males,” Davis’ memo says. “NASCAR is the highest cost per qualified lead and cost per engagement property in our portfolio; cost-per-lead is three times as expensive as the NHRA.”