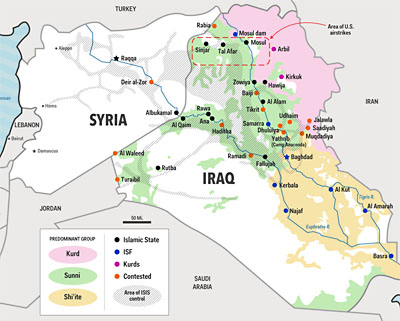 President Obama has no plans to ask Congress for authority under the War Powers Act to take military action in Iraq. But he’s hardly the only one to blame here. An even bigger problem is that Congress doesn’t really want him to ask in the first place:

“This is not about an imperial presidency, it’s about a Congress that’s reluctant to cast tough votes on U.S. military action,” said [Senator Tim] Kaine….“We should not be putting American men and women’s lives at risk if we are not willing to do the political work to reach a consensus that it’s necessary,” Mr. Kaine said in an interview.

….Senior administration officials note that congressional leaders, who met with Mr. Obama about Iraq in June, have explicitly told them Mr. Obama need not come to Congress to authorize military action.

Representative Nancy Pelosi of California, the House minority leader whose weekly conference calls with Democrats during the congressional break have been dominated by discussions of Iraq, said that Mr. Obama had wide latitude to act without Congress and suggested that Republicans eager to criticize the president would not be as eager to vote.

“We’ll see where the Republicans will be who have been calling for this, that and the other thing, if they had to vote on Iraq,” Ms. Pelosi said in San Francisco last week….Senator Bob Corker of Tennessee, the senior Republican on the Foreign Affairs Committee, who helped draft the resolution to authorize strikes against Syria, has not called for a similar measure for the current operation in Iraq. He said he wanted administration officials to testify at a hearing when Congress returned about their strategy for the airstrikes and what authorities they intended to use in executing them.

It’s an election year, after all, and this would be politically difficult for everyone. Democrats probably aren’t excited about re-engaging in Iraq, but they’d be reluctant to oppose a president of their own party. Republicans would love to oppose Obama, but if they did they wouldn’t be able to complain any more about what a wuss he is. Better for everyone to let sleeping dogs lie. That way they can kibitz from the sidelines and then, when it’s all over, pretend that they supported a better policy all along.

It’s cowardly, but that’s politics. In any case, it’s certainly hard to blame Obama for overreach when the branch of Congress that passed the War Powers Act in the first place has all but begged him to ignore it.