Robert J. Dowlut is the NRA’s top lawyer, a “human encyclopedia” on the subject of state gun laws and the man responsible for much of the gun lobby’s success in a series of court cases that have steadily eroded restrictions on gun ownership in the United States. “He is a really 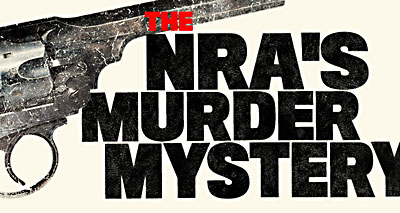 reliable and exhaustive source for legal input on the issue,” says one admirer.

But 50 years ago, according to a pile of court documents MoJo’s Dave Gilson uncovered for “The NRA’s Murder Mystery,” a teenage Dowlut had a rather different relationship with guns:

Shortly before dark on the evening of April 17, 1963, Robert J. Dowlut went looking for a gun inside the city cemetery in South Bend, Indiana. Making his way through the headstones, he stopped in front of the abandoned Studebaker family mausoleum. He knelt by the front right corner of the blocky gray monument and lifted a stone from the damp ground. Then, as one of the two police detectives accompanying him later testified, the 17-year-old “used his hands and did some digging.” He unearthed a revolver and ammunition. As Dowlut would later tell a judge, the detectives then took the gun, “jammed it in my hand,” and photographed him. “They were real happy.”

Two days earlier, a woman named Anna Marie Yocum had been murdered in her South Bend home. An autopsy determined she had been shot three times, once through the chest and twice in the back, likely at close range as she’d either fled or fallen down the stairs from her apartment. Two .45-caliber bullets had pierced her heart.

….The following morning, Dowlut was charged with first-degree murder. A year and a half later, a jury found him guilty of second-degree murder. Before the judge handed down a life sentence, he asked the defendant if there was any reason why he shouldn’t be put away. Dowlut replied, “I am not guilty.” A day later, the Indiana State Prison in Michigan City registered Dowlut, now 19, as prisoner number 33848.

Less than six years later, Robert Dowlut would be a free man—his murder conviction thrown out by the Indiana Supreme Court because of a flawed police investigation. The court ordered a new trial, but one never took place. Dowlut would return to the Army and go on to earn college and law degrees. Then he would embark on a career that put him at the epicenter of the movement to transform America’s gun laws.