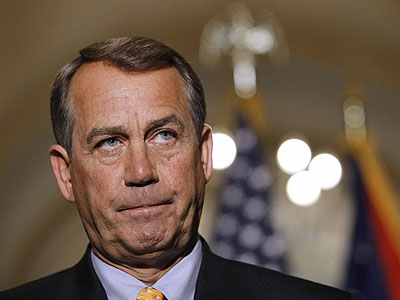 Fine. Washington is consumed with trivia. So let’s talk trivia. A couple of weeks ago, when John Boehner announced he would sue President Obama over his refusal to “faithfully execute the laws of our country,” he listed several issues of particular concern:

On matters ranging from health care and energy to foreign policy and education, President Obama has repeatedly run an end-around on the American people and their elected legislators, straining the boundaries of the solemn oath he took on Inauguration Day.

At the time, I wrote that I was surprised Boehner didn’t include immigration in this list, since this is one of the tea party’s biggest hot buttons. Was this just an oversight, or was it deliberate? Well, on Sunday, Boehner wrote an op-ed for CNN that said this:

The President’s habit of ignoring the law as written hurts our economy and jobs even more. Washington taxes and regulations always make it harder for private sector employers to meet payrolls, invest in new initiatives and create jobs — but how can those employers plan, invest and grow when the laws are changing on the President’s whim at any moment?

I don’t take the House legal action against the President lightly. We’ve passed legislation to address this problem (twice), but Senate Democrats, characteristically, have ignored it.

Wait a second. Which problem? What is Boehner talking about here? Brian Beutler, who apparently reads tea leaves better than I do, suspected Boehner may have been signaling an interest in immigration, so he called Boehner’s office to ask about that:

Boehner didn’t name the two bills in the article. But his staff confirms that they are the ENFORCE the Law Act and the Faithful Execution of the Law Act, both of which were drafted with an eye toward reversing DACA. The former would expedite House and Senate lawsuits against the executive branch for failing to enforce the law. The latter would compel government officials to justify instances of non-enforcement.

DACA is the Deferred Action for Childhood Arrivals directive, which Obama signed in 2012. It instructs immigration officials to stop trying to deport children who arrived in the United States at an early age and are still undocumented.

This is potentially interesting. If you’d asked me, I would have said that Boehner’s best bet for the first couple of lawsuits would be Obama’s unilateral extension of both the employer mandate and the individual mandate in Obamacare. Politically it’s a winner because it’s Obamacare, and the tea party hates Obamacare. Legally, it’s a winner because Boehner has a pretty good case that Obama overstepped his authority.

But if Beutler is right, he may instead be targeting DACA, the so-called mini-DREAM Act. This is peculiar. True, the tea party hates it, so it has that going for it. However, it was a very popular action with the rest of the country. It was also, needless to say, very popular with Hispanics, a demographic group that Republicans covet. And legally, this puts Boehner on tricky ground too. Presidents have pretty broad authority to decide federal law-enforcement and prosecutorial priorities, so Obama will be able to make a pretty good case for himself. It’s not a slam-dunk case, and it’s certainly possible he could lose. But he sure seems to be on more solid ground than with the Obamacare mandate delays.

We’ll see. ENFORCE and FELA both cover more ground than just DACA, so we’re still in the dark about what exactly Boehner plans to sue Obama over. Mini-DREAM sure seems like a loser to me, though. Do Republicans really want to put a final nail in the coffin of their efforts to expand their reach in the Hispanic community? This would do it.