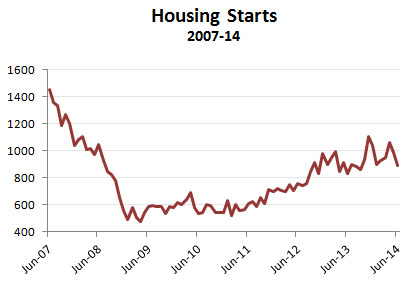 Housing is the biggest single sector of the consumer economy, and pent-up demand for housing is usually the primary engine that pulls a country out of recession. But as Neil Irwin reports, we’re just not seeing much of a rebound in housing:

Another disappointing reading on the housing market was released Thursday morning. The number of housing units that builders started work on fell 9.3 percent in June, to an 893,000 annual rate. The number of housing permits issued by local governments, a forward-looking measure that government statisticians consider less prone to measurement error, fell 4.2 percent. Forecasters had expected both numbers to rise.

….What makes the June results curious — and particularly disappointing — is that some of the excuses heard for weak housing numbers don’t hold water any more. The unusually bad winter weather that slowed construction in January and February is now long past….And mortgage rates spiked in the second half of 2013, perhaps leading builders to exercise a greater note of caution as they weighed new projects. But rates have fallen more or less steadily through the first half of 2014.

Now, as you can see from the chart, there’s a lot of volatility in housing starts. So don’t take the June decline too seriously. Nonetheless, after starting to rise in 2011, starts have been nearly flat for two years now. If housing is going to save the economy, it’s sure taking its sweet time. More than likely, though, it’s just not going to happen. It sure looks like we have many years of a weak, sluggish recovery ahead of us.