A few days ago, Google announced that it was beavering away on the 41,000 requests it had gotten from people demanding that it remove links to unflattering articles about themselves. So just what kind of people are making these requests? Brad 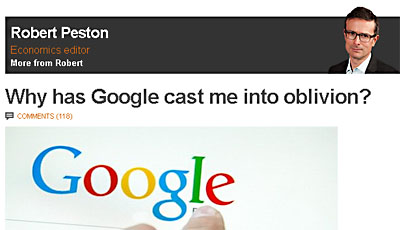 DeLong directs me to the BBC’s Robert Peston, who gives us a clue:

This morning the BBC received the following notification from Google:

Notice of removal from Google Search: we regret to inform you that we are no longer able to show the following pages from your website in response to certain searches on European versions of Google:

What it means is that a blog I wrote in 2007 will no longer be findable when searching on Google in Europe….Now in my blog, only one individual is named. He is Stan O’Neal, the former boss of the investment bank Merrill Lynch.

My column describes how O’Neal was forced out of Merrill after the investment bank suffered colossal losses on reckless investments it had made.

Is the data in it “inadequate, irrelevant or no longer relevant”?

I wonder if there’s a way to make this backfire? How hard would it be to create an automated process that figures out which articles Google is being forced to stuff down the memory hole? Probably not too hard, I imagine. And how hard would it then be to repost those articles in enough different places that they all zoomed back toward the top of Google’s search algorithm? Again, probably not too hard for a group of people motivated to do some mischief.

Maybe someone is already working on this. It wouldn’t surprise me. And I wonder if Google’s surprisingly quick response to the EU decision isn’t designed to spur exactly this kind of backlash. That wouldn’t really surprise me either.