After President Obama announced Jay Carney’s resignation as White House press secretary last Friday, a number of people suggested we just do away with the position. Dave Weigel’s take was typical:

The tragedy of the White House beat, as hacks like me keep pointing out, is that the White House is forever innovating ways to make it useless. A specific question about the administration? Why, there’s another department you can direct your questions to. What news there is gets generated by reporters acting on their own, not by anything pulled from the White House press 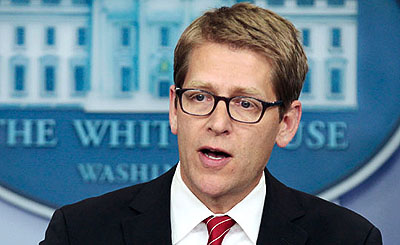 Why do we need this particular public official? As the White House pioneers ways to avoid questions, what’s the point of the job Jay Carney’s now leaving?

This is all true. And yet….I wonder if this lets reporters off too easily? Every once in a while I happen to catch a White House press briefing, either live or on YouTube, and what strikes me is that reporters are less interested in gaining actual information than in simply playing gotcha. Do press secretaries dodge? Sure. But then again, if you ask whether the president still has confidence in Eric Shinseki (this is Weigel’s example), what do you expect? It’s a dumb question, designed to produce theater, not information. Everyone knows perfectly well that you have to express confidence in your deputies until the day you don’t. If you ask about it, you’re just going to get mush.

Ditto for lots of other press room fodder. White House reporters seem to be in love with asking questions that they know perfectly well aren’t going to be answered, for no reason except that it provides a soundbite for the evening news that shows them being “tough.”

If I had to guess, I’d say this culture started with Ron Ziegler and Watergate. In that case, tough, relentless questioning was legitimate. In general, it’s legitimate whenever you’re probing a genuine scandal of some kind. But after Watergate was over, White House reporters somehow got in the habit of treating everything like a scandal, and press secretaries got in the habit of treating every question as an attack. After 40 years of this, it’s become a dysfunctional relationship that does no one any good.

So yeah, get rid of the press secretary. Get rid of the televised daily briefing. Maybe the president should just have a low-level staff that distributes schedules, answers basic questions about presidential actions, and coordinates interview requests. Since these would be low-level aides, nobody would expect them to have direct access to the president, and therefore there’d be no point in badgering them.

And then, everyone could go back to doing actual reporting, instead of pretending that either the press secretary or the president himself will ever produce real news. Tough questioning hasn’t produced any real news from either one of them for years, and that’s unlikely to change.