David Brooks criticizes “reform” conservatism today, suggesting that it’s not sufficiently in touch with the realities of the modern economy. I appreciate that, but I wish we could get a lot less of this:

Today, millions of Americans are behaving in ways that make no economic sense: dropping out of school, having children out of wedlock. They do so because the social guardrails that used to guide behavior have dissolved. 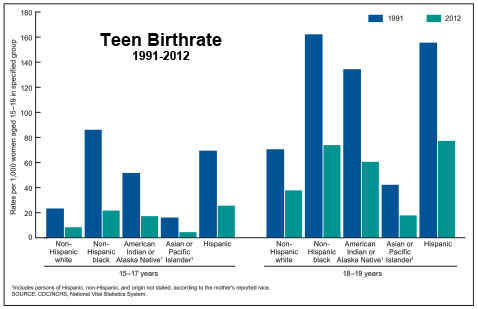 You need to be careful with this stuff. The teen dropout rate has actually declined over the past few decades, as has the teen pregnancy rate—which is what most people think of when you mention children born out of wedlock. The phenomenon Brooks is talking about is the increase in 20-something women having children outside of marriage—sometimes on their own, sometimes with partners they live with. That certainly represents a cultural change in the value of marriage, but it’s really not enough to suggest that our social guardrails have dissolved. In fact, if you look at most measures of social breakdown, things have gotten better over the past few decades, not worse.

This is a mistake that Brooks has made before: insisting that society is breaking down without really reviewing the evidence of actual behavior. But there’s a lot more to society than just the marriage rate.

That said, it’s nice to hear him say this to his fellow conservatives:

We are moving from a world dominated by big cross-class organizations, like public bureaucracies, corporations and unions, toward a world dominated by clusters of networked power. These clusters — Wall Street, Washington, big agriculture, big energy, big universities — are dominated by interlocking elites who create self-serving arrangements for themselves. Society is split between those bred into these networks and those who are not. Moreover, the U.S. economy is increasingly competing against autocratic economies, which play by their own self-serving rules.

Sometimes government is going to have to be active to disrupt local oligarchies and global autocracies by fomenting creative destruction — by insisting on dynamic immigration policies, by pumping money into research, by creating urban environments that nurture innovation, by spending money to give those outside the clusters new paths to rise.