Health care costs have increased sharply over the past few quarters, causing a lot of hand-wringing despite the fact that it’s probably due to an entirely predictable cause: higher utilization of the health care system thanks to Obamacare. Still, we don’t know that for sure. Maybe there’s also an underlying rebound in medical inflation that spells trouble down the road.

We probably won’t know for sure for years, but today the Committee for a Responsible Federal Budget released a data point that suggests underlying costs remain well controlled. The Medicare 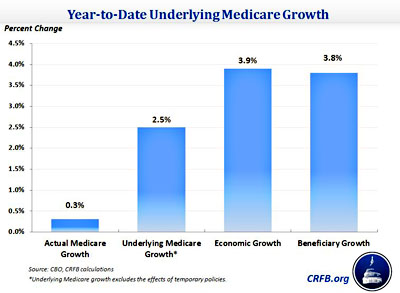 system has 3.8 percent more beneficiaries than last year, but underlying costs have increased only 2.5 percent:

Adjusted for timing shifts, Medicare growth is even lower through eight months at just 0.3 percent. And even after removing the effects of temporary policies, year-to-date Medicare growth remains extremely low at 2.5 percent, even lower than through April. This is more than a full percentage point below economic and beneficiary growth, meaning that even excluding one-time effects, Medicare spending is on pace to both fall as a percent of GDP and on a per-capita basis.

All true, except even reported Q1 acceleration for total (red) may be revised now that we have real #s (blue).

Orszag’s chart is below, with PCE medical inflation in red and the actual change in total health care spending in blue. Normally the two trend lines track each other fairly well, but they diverged dramatically in late 2013. This suggests that the medical inflation number may be revised downward once actual health care spending is taken into account. 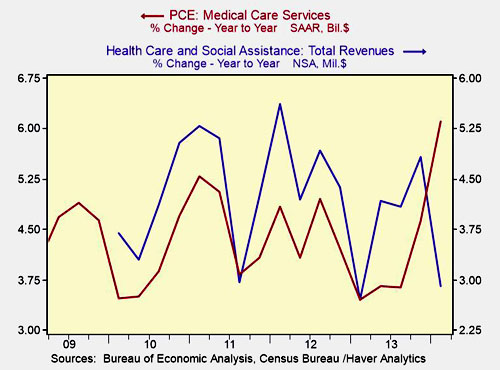