One of the things that liberals chattered about endlessly in the latter stages of the Iraq War—and which seemed to annoy conservatives just as endlessly—was the simple claim that Iraq’s problems were fundamentally political, not military. There would be no lasting peace in Iraq unless and until there was a political accommodation between the Kurds, the Shia, and the Sunni—especially the latter two. Unfortunately, Prime Minister Nouri al-Maliki seemed completely uninterested in reaching any sort of genuine power-sharing agreement with the Sunni minority that had ruled Iraq in Saddam’s day, and no amount of cajoling from Americans swayed him even a little. Without that, any kind of durable peace in Iraq was out of reach, so it made sense for us to leave in 2011. Why remain when there was little we could do that would truly make a difference?

This is why our withdrawal from Iraq is no more than a tiny peripheral factor in the growing jihadist Sunni rebellion that’s overwhelming Iraq right now. Ditto for our reluctance to arm “moderates” in the Syrian civil war. Laying the blame there is mostly just a tired but convenient talking point for the 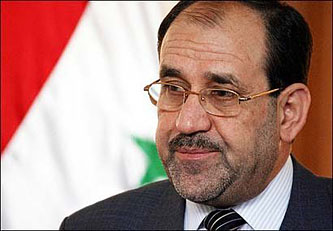 Fox News set and the dwindling but noisy band of unrepentant neocons. Marc Lynch takes up the story from there:

The more interesting questions are about Iraq itself. Why are these cities falling virtually without a fight? Why are so many Iraqi Sunnis seemingly pleased to welcome the takeover from the Iraqi government by a truly extremist group with which they have a long, violent history?

….The most important answers lie inside Iraqi politics. Maliki lost Sunni Iraq through his sectarian and authoritarian policies. His repeated refusal over long years to strike an urgently needed political accord with the Sunni minority, his construction of corrupt, ineffective and sectarian state institutions, and his heavy-handed military repression in those areas are the key factors in the long-developing disintegration of Iraq. In late 2012, protests had swelled across Sunni areas of Iraq, driven by genuine popular anger but backed by many of the political forces now reportedly cooperating with ISIS’s advance (essential background here). The vicious assault on the Huwija protest camp by Iraqi security forces, in the midst of political negotiations, galvanized hostility to the Iraqi state and paved the way for growing popular support for a returning insurgency. Maliki’s heavy-handed security response to the escalating insurgency across Anbar, including the bombardment of Fallujah, has predictably driven more and more Sunnis into their ranks. Maliki’s purges of the Sunni leadership discredited or removed Sunni leaders willing to play the inside game, and pushed some of them toward supporting insurgency. His exclusionary policies, attempts to monopolize power and rough security practices radicalized a Sunni community that might have been brought into the system following the civil war. Iraq’s political class as a whole has done little better.

Lynch offers a few additional thoughts on whether Maliki is likely to change course in the face of the threat from ISIS insurgents. So far, it doesn’t seem likely. And as long as that’s true, there’s little reason that America should get involved in Iraq’s ongoing sectarian war yet again.