Brian Beutler thinks Republicans are likely to force yet another government shutdown, this time over the EPA’s proposed restriction on coal-fired power plants. But unlike the last shutdown, which came last September because it literally seemed like their last chance to prevent Obamacare from taking effect, they have more leeway this time around:

I think history and reason both suggest they will not shut down the government before the election—but that their vehement interest in emitting as much carbon pollution as possible, combined with the likelihood that they’ll win several Senate seats in November, presages a dramatic confrontation between Republicans Congress and the White House either right after the election or early next Congress.

….The crucial difference between last September and the coming one is that Republicans (particularly the hardline/opportunist faction) were staring down the imminent launch of the Affordable Care Act on October 1, 2013….The EPA rule is nothing like that. Or, at least, it isn’t there yet. If Republicans cave now, or simply punt a confrontation over it until after the election, they’ll have sacrificed nothing other than the opportunity to pants themselves in front of God and everyone a month before the election. And if they win a bunch of seats in November, their hands will be strengthened 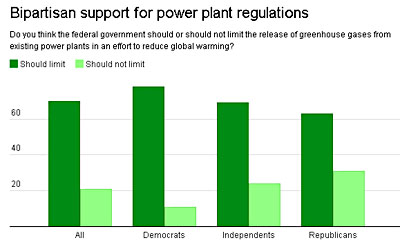 when they actually do go to the mattresses during this year’s lame duck session of Congress or in early 2015.

This makes perfect sense. That doesn’t mean Republicans will do it this way, of course, since common sense has been in short supply in the GOP caucus lately. Still, the recent election of relatively non-insane folks to the House leadership suggests just enough adult presence to keep the yahoos in line and the government open at least through November. After that, it’s anyone’s guess. If they’re really going to do it, though, it might be best to wait until late next year so they can force all their presidential candidates to weigh in. That should do maximum damage to the GOP brand, which seems to be their real goal here.