Megan McArdle, despite her own experience with crushing student debt, doesn’t support efforts to allow students to refinance their loans at lower rates:

It’s good to remember, as we discuss these plans, that people with college degrees are the best-off people in the U.S. They are a cognitive elite with substantially more earning power than almost anyone else….It’s hard to see why we would take money from other people and give it to this group.

At this point, someone in the audience is mentally complaining that I don’t understand the impact student loans have on family formation . . . buying a house . . . saving for retirement. But au contraire: I 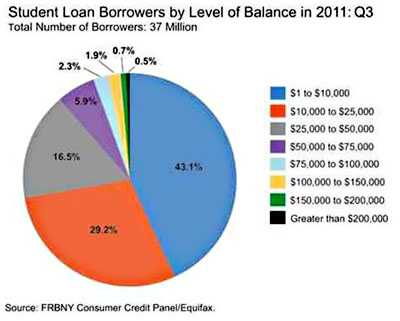 understand all too well….However. Some perspective is useful.

This graphic comes from a 2012 Federal Reserve report. While you may have heard the horrifying statistics about how the average borrower has almost $30,000 in student loan debt, the median borrower has more like $12,000. That number gets dragged upward by a small number of students with huge loans — many of them professional school graduates like me. The overwhelming majority of borrowers have less than $25,000 in debt, which is to say something more like a car loan than a mortgage. Yet we do not argue that we need to reduce the cost of car loans lest the Toyota Camry should keep yet another generation of Americans from the precious boon of homeownership.

Surprisingly, I partly agree. College grads are indeed the best paid workers in America, and spending ever more tax money on student loans seems a bit too much like taking from the poor and giving to the rich for comfort. What’s more, I’m not convinced that ever more generous student loan programs do any good. I suspect that, in practice, they merely allow universities to raise their tuition fees even more than they otherwise would.

And yet….unlike McArdle, I’m persuaded by the aggregate numbers that we have a genuine problem here. We don’t have a problem with college grads buying ever more expensive cars, which is why no one wants to provide auto loan relief. We do have a problem with the cost of college skyrocketing. The resultingly high aggregate student loan debt is having a noticeable adverse macroeconomic impact (family formation, buying a house, etc.) at a time when we can ill afford it, which makes the case for a temporary refinancing program fairly compelling. More generally, it’s also the case that no society is well served by making income a barrier to higher education. More and more, however, that’s what we’re doing.

But that ship has sailed. Unlike the era in which I graduated, public universities are expensive these days, and that’s not likely to change. One answer might be to target public assistance more sharply on public schools. Basically, I’d like to see anyone who qualifies be able to attend a public university for only a nominal fee. Does that mean less money for assistance to Harvard students? Yes, but I’m not sure that would really be such a tragedy. Some students would get assistance elsewhere, while others would simply have to settle for UCLA or Ohio State. In the real world, however, I’ll bet that only a minuscule fraction of students would truly lose much by having to go to UCLA instead of Harvard—or by having to accept that Harvard will put them into debt. The cost wouldn’t be zero, perhaps, but probably pretty small.

In any case, the rising cost of college is a real problem. One way or another, I think we’d all benefit as a country by doing something about it. Whether that’s a reduction in loan costs, or a reduction in public university fees, is something we can argue about. But we ought to do something.