Tim Lee writes about a recent scandal at the federal circuit court that specializes in patent cases:

Last week Judge Randal Rader, the court’s chief judge, admitted that he wrote an effusive email to [patent attorney Edward] Reines. The email praised the attorney’s work and encouraged him to share the email with potential clients, a breach of judicial impartiality. The revelation has forced Rader step down as the court’s chief effective this Thursday. Rader plans to stay on the court as a circuit judge. The Federal Circuit was also forced to re-consider two cases involving Reines after Rader retroactively recused himself from them.

Rader’s indiscretion is the last straw for Jeff John Roberts of GigaOm (no relation to the chief justice, as far as I know), who writes: “the Federal Circuit looks beyond salvaging. It’s time for Congress to disband the court.”

The problem with the patent court is that it seems to have suffered the equivalent of regulatory capture. I don’t know the backgrounds of the judges on the court, but they’re awfully prone to upholding patent claims. They’re sympathetic both in terms of broad legal interpretations—widening the 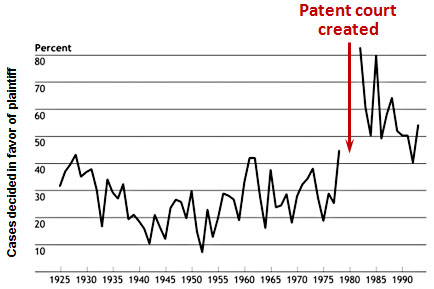 scope of software patents far beyond what Supreme Court precedent requires (or even suggests)—and they’re sympathetic in terms of specific cases, where they rule in favor of plaintiffs well over half the time (see chart on right).

I don’t know if getting rid of the patent court and simply allowing patent cases to be heard by ordinary circuit courts is the right answer. That’s how patent cases used to be heard, but there’s been a lot of water under the bridge since then. Besides, that would require congressional action, and what are the odds of that? What’s more, if Congress did rouse itself to do something about this, a better course of action would be legislation that explicitly reins in the scope of software patents and does more to make patent trolling less lucrative. That would be the right thing to do. We can keep hoping, anyway.