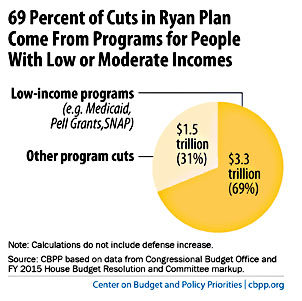 A few days ago I guessed that 80+ percent of the cuts in Paul Ryan’s latest budget blueprint came from programs for the poor. Today, CBPP dives a little deeper and puts the number at 69 percent. The cuts come in five categories: health care; food assistance; college grants; other mandatory programs such as SSI, school lunches, and EITC; and miscellaneous discretionary cuts. However, CBPP warns that its 69 percent number is very likely conservative:

In cases where the Ryan budget cuts funding in a budget category but doesn’t distribute that cut among specific programs — such as its cuts in non-defense discretionary programs and its unspecified cuts in mandatory programs — we assume that all programs in that category, including programs not designed to assist low-income households, will be cut by the same percentage.

That’s definitely a risky assumption. In real life, two-thirds of those cuts would almost certainly end up coming out of programs for the poor. We’ll never know for sure because Ryan never has the guts to specify where his cuts would go, but I’m willing to bet that if Republicans were forced to provide line items for all of Ryan’s broad categories, we’d end up back at 80 percent of the cuts hitting those with low incomes.