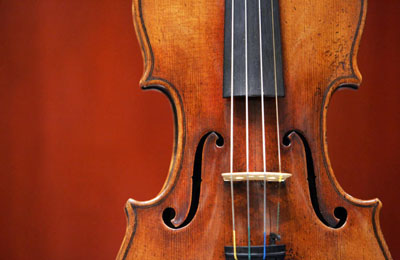 I’ve long suspected this, but now we have Scientific Proof™. Professional violinists who insist that there’s nothing like a Strad can’t even tell them apart from modern instruments:

In this study, 10 renowned soloists each blind-tested six Old Italian violins (including five by Stradivari) and six new during two 75-min sessions—the first in a rehearsal room, the second in a 300-seat concert hall. When asked to choose a violin to replace their own for a hypothetical concert tour, 6 of the 10 soloists chose a new instrument….On average, soloists rated their favorite new violins more highly than their favorite old for playability, articulation, and projection, and at least equal to old in terms of timbre. Soloists failed to distinguish new from old at better than chance levels.

Wine snobs can barely distinguish red from white when they’re blindfolded. Pro violinists can’t pick out a Strad from a decent modern violin. Art aficionados are routinely taken in by fakes even when they’re allowed to investigate them from inches away. The examples of this kind of thing are endless.

So am I skeptical when you claim your $90,000 turntable is really and truly light years better than some mere $2,000 POS? Yes I am. Am I skeptical when you claim you can distinguish Beluga caviar from Sterlet? Yes I am. Hell, I’m not even sure you can tell the difference between Coke and Pepsi. If you can do it blindfolded, then I’ll believe you. Until then, don’t even bother me with this nonsense.