They tried to put the product on the market, and the market reacted.

I know that “Orwellian” is overused, but what else can you call this? The product in question is a “smart gun,” which can only be fired by its registered owner. A company called Armatix put one on the market—you know, the market, a place where people can voluntarily buy or 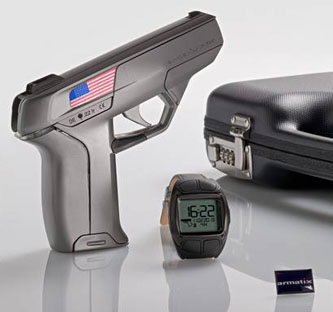 decline to buy products depending on whether they want them—and the gun lobby went ballistic:

Belinda Padilla does not pick up unknown calls anymore, not since someone posted her cellphone number on an online forum for gun enthusiasts. A few fuming-mad voice mail messages and heavy breathers were all it took. Then someone snapped pictures of the address where she has a P.O. box and put those online, too. In a crude, cartoonish scrawl, this person drew an arrow to the blurred image of a woman passing through the photo frame. “Belinda?” the person wrote. “Is that you?”

Her offense? Trying to market and sell a new .22-caliber handgun that uses a radio frequency-enabled stopwatch to identify the authorized user so no one else can fire it. Ms. Padilla and the manufacturer she works for, Armatix, intended to make the weapon the first “smart gun” for sale in the United States.

….The National Rifle Association, in an article published on the blog of its political arm, wrote that “smart guns,” a term it mocks as a misnomer, have the potential “to mesh with the anti-gunner’s agenda, opening the door to a ban on all guns that do not possess the government-required technology.”

According to Keane, this is the market “reacting.” It’s certainly heartwarming to see such dedication to free enterprise.