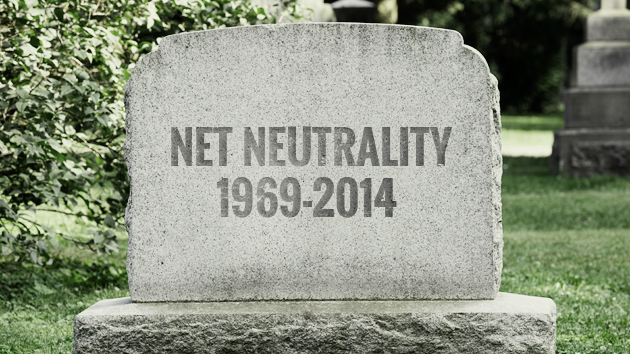 Apparently net neutrality is officially dead. The Wall Street Journal reports today that the FCC has given up on finding a legal avenue to enforce equal access and will instead propose rules that explicitly allow broadband suppliers to favor companies that pay them for faster pipes:

The Federal Communications Commission plans to propose new open Internet rules on Thursday that would allow content companies to pay Internet service providers for special access to consumers, according to a person familiar with the proposal.

The proposed rules would prevent the service providers from blocking or discriminating against specific websites, but would allow broadband providers to give some traffic preferential treatment, so long as such arrangements are available on “commercially reasonable” terms for all interested content companies. Whether the terms are commercially reasonable would be decided by the FCC on a case-by-case basis.

…The FCC’s proposal would allow some forms of discrimination while preventing companies from slowing down or blocking specific websites, which likely won’t satisfy all proponents of net neutrality, the concept that all Internet traffic should be treated equally. The Commission has also decided for now against reclassifying broadband as a public utility, which would subject ISPs to much greater regulation. However, the Commission has left the reclassification option on the table at present.

So Google and Microsoft and Netflix and other large, well-capitalized incumbents will pay for speedy service. Smaller companies that can’t—or that ISPs just aren’t interested in dealing with—will get whatever plodding service is left for everyone else. ISPs won’t be allowed to deliberately slow down traffic from specific sites, but that’s about all that’s left of net neutrality. Once you’ve approved the notion of two-tier service, it hardly matters whether you’re speeding up some of the sites or slowing down others.

This might have been inevitable, for both legal and commercial reasons. But that doesn’t mean we have to like it.