With a few exceptions, the interstate highway system is blissfully toll-free. That may be about to change:

With pressure mounting to avert a transportation funding crisis this summer, the Obama administration Tuesday opened the door for states to collect tolls on interstate highways to raise revenue for roadway repairs.

….The question of how to pay to repair roadways and transit systems built in the heady era of post-World War II expansion is demanding center stage this spring, with projections that traditional funding can no longer meet the need. That source, the Highway Trust Fund, relies on the 18.4-cent federal gas tax, which has eroded steadily as vehicles have become more energy efficient. 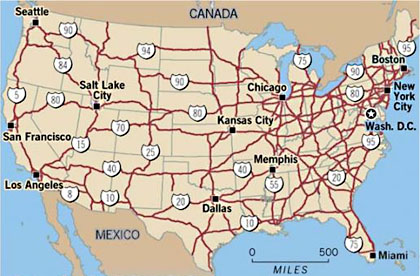 ….With the trust fund about to run into the red and the current federal highway bill set to expire Sept. 30, Congress cannot — as its members often note — keep “kicking the can down the road.”

Hold on. It’s true that we’re using a bit less gasoline than in the past. But that’s not why the Highway Trust Fund is in dire shape. It’s in dire shape because the federal gas tax has been cut nearly in half since it was last changed two decades ago. In 1993 dollars, it’s now about 11 cents per gallon. If it had just kept up with inflation, highway funding would be in fine shape.

But you know what else would cut down on driving? Gas taxes restored to 1993 levels. So what’s the point of dicking around instead with tolls and corporate tax reform and all that? The answer, of course, is Republicans, who have sworn a blood oath never to raise taxes, even if “raising” actually means “keeping them at the same level.” So instead of just bumping up the gax tax by a dime or two and then indexing it to inflation—no muss, no fuss—we’re going to play a bunch of idiotic and annoying games merely to keep our roads in decent repair.

Thanks, Republicans. I appreciate it.