Over at The Upshot, a crack team of researchers has put together an interactive map showing which baseball teams are preferred in which regions of the country. The overall results are pretty predictable, of course, but the authors make a few interesting points about exactly where the geographical dividing lines are between traditional rivalries. I thought the most intriguing part was which teams were left out completely. Here’s the map: 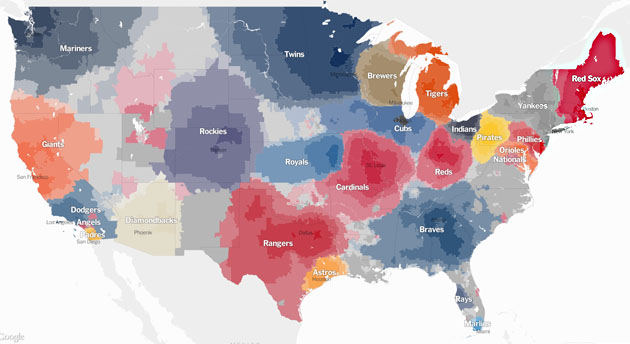 There is not a single zip code in the entire country that favors the New York Mets. Even in 11368, the home of Citi Field, fans prefer the Yankees by 53 to 25 percent.

And the Oakland A’s have it even worse. In 94501, the home of the Oakland Coliseum, fans prefer the San Francisco Giants by a whopping 59 to 18 percent. This is spectacularly embarrassing. The Mets, after all, are at least in the same city as the Yankees, so divided loyalties are natural. The A’s are in Oakland, a different city with a culture of its own. Sure, maybe there’s no there there, but that’s a culture! And yet, even the working-class East Bay has apparently been so taken over by yuppified San Franciscans escaping sky-high rents that the A’s can’t get any love even after being canonized by Michael Lewis and Brad Pitt as the champions of Moneyball. Sad.

(The Toronto Blue Jays aren’t on the map either, but I assume that’s because the map doesn’t include Canada. I draw no conclusions about Toronto’s fan base, though I suspect we can assume it’s pretty minimal too.)