Here’s a bit of contrarianism for you today: Austin Frakt says that the much-maligned Medicare “doc fix” actually works pretty well. This is Congress’s annual charade in which it overrides the formula for Medicare reimbursements to doctors, resulting in doctors getting paid more—but without ever changing the formula itself. (Why? Because changing the 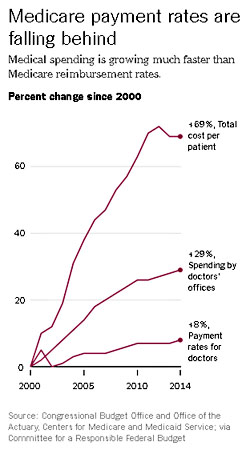 formula would cost money, and they’d have to figure out how to pay for it. Better to just kick the can down the road each year.)

So from one point of view, the formula is just a joke. However:

From another point of view, the formula — as flawed as it is — has helped keep Medicare spending lower than it might otherwise have been. Instead of cutting physician payments by the large amount the S.G.R. demands, Congress has increased payment rates, but typically by only tiny amounts — at an annual rate of just 0.7 percent. That pace does not keep up with the typical cost of care.

The gap can be seen in the chart below. The bottom line illustrates how Congress has permitted Medicare physician payments to grow. The middle line shows an index of medical spending — spending at a typical physician’s practice over time — that is a proxy for the change in price for a typical, or average, medical treatment.

….The relatively gentle increases in Medicare payment rates makes clear that the formula is not the problem. I think that the formula has actually helped Congress be more fiscally responsible than it otherwise might have been. To physicians who fear a double-digit decrease in payment rates called for by the formula, a 0.5 percent or a 1.5 percent increase that Congress passes looks like a great deal.

So there you go. Two cheers for the Sustainable Growth Formula!