Dave Weigel is tired of the liberal press getting all hot and bothered every time some fringe Republican nutball says something stupid. Fair enough. But today he provides yet another example 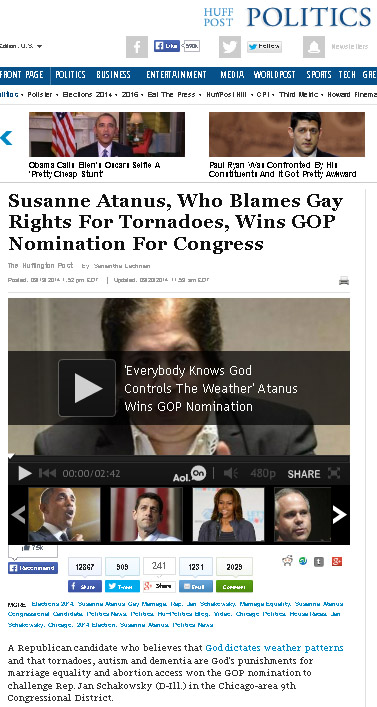 and then makes a problematic comparison:

To date, nearly 90,000 people have “liked” or “shared” a story tagged “Candidate Who Blames Gay Rights for Tornadoes Scores Big GOP Win.” The candidate is Susanne Atanus, “who believes that God dictates weather patterns and that tornadoes, autism and dementia are God’s punishments for marriage equality.”

What’s missing from the story? Atanus’ status as a fringe candidate. She’s running in Illinois’ 9th District, which covers the liberal northern suburbs of Chicago….Susanne Atanus will never, ever serve in Congress.

….Both parties are going to be cursed with a few idiot candidates this year….In 2012 the declining Tennessee Democratic Party accidentally nominated a conspiracy-minded flooring installer for U.S. Senate. The media did not hustle down to Nashville and Memphis to cover him. No Democrat in another state was asked whether they agreed with this candidate about the NAFTA superhighway or the “Godless new world order.”

Why didn’t the media hustle down to Nashville to interview Mark Clayton? Wikipedia does as good a job as anyone explaining it:

Tennessee’s Democratic Party disavowed the candidate over his active role in the Public Advocate of the United States, which they described as a “known hate group”. They blamed his victory among a slate of little-known candidates on the fact that his name appeared first on the ballot, and said they would do nothing to help his campaign, urging Democrats to vote for “the write-in candidate of their choice” in November.

In the case of Clayton, nobody thought he represented the secret id of the Democratic Party. And the local party went out of its way to make sure Clayton was well and truly shunned as a crackpot they wanted nothing to do with.

Has anything similar happened in Illinois? Has the Republican Party denounced Atanus and urged voters to cast their ballots for someone else? No they haven’t. [Actually, yes they have. See update below.] Do reporters believe that Atanus does indeed represent a significant segment of the modern Republican base? Yes they do. Is this fair? Well….yes. It kind of is fair, isn’t it?

As it happens, I think that fringey right-wing candidates get less attention than Weigel believes. Sure, HuffPo plays them up, for the same reason they have a whole staff devoted to finding and posting sideboobs. It’s clickbait for the online hordes. But does the rest of the media obsess about the Susanne Atanuses of the world? Not really. Not if you’re a normal, casual news consumer, rather than an omnivore like Weigel and all the rest of us bloggy denizens. And to the extent they do cover the right-wing crackpots more than the lefty variety, the truth is that it’s pretty justified. These folks represent a real constituency, and the mainstream of the Republican Party, far from disowning them, practically falls all over itself to insist that they have nothing but admiration and respect for their willingness to stand up and fight for traditional values without compromise. That makes them worth a story.

UPDATE: Hey, it turns out that the media did write about Mark Clayton. The liberal media, that is. Here is MoJo’s own Tim Murphy writing on the day after the primary.

UPDATE 2: Weigel points out that the chairman of the Illinois GOP did indeed denounce Atanus after her gaffe. Fair point. Still, she’s hardly the first conservative to blame our problems on God’s wrath against liberal hedonism. It’s not unreasonable to think she represents a persistent strain of conservative thought and therefore deserves a bit of attention.