When we last met cancer patient Julie Boonstra, she was the centerpiece of a TV ad claiming that her new insurance plan under Obamacare was far more expensive than her old plan and didn’t cover all her medications. On examination, it turned out to cost about the same. Today, however, 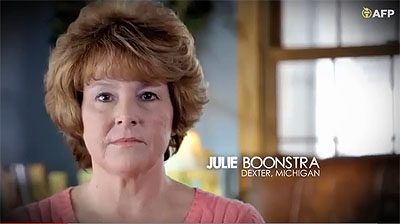 the Detroit News reports that, in fact, Obamacare will save Boonstra more than a thousand dollars per year:

Boonstra said Monday her new plan she dislikes is the Blue Cross Premier Gold health care plan, which caps patient responsibility for out-of-pocket costs at $5,100 a year, lower than the federal law’s maximum of $6,350 a year. It means the new plan will save her at least $1,200 compared with her former insurance plan she preferred that was ended under Obamacare’s coverage requirements.

….When advised of the details of her Blues’ plan, Boonstra said the idea that it would be cheaper “can’t be true.”

“I personally do not believe that,” Boonstra said.

If you think I’m posting about this just because it’s a big, fat poke in the face to the Koch-funded ambulance chasers at AFP who originally ran the Boonstra ad—well, you’re right. But there’s a real point to be made about this too. I don’t know anything about Julie Boonstra, but it sure seems as if she’s been bamboozled by a bunch of fanatic Obamacare haters who have caused her a ton of pain and misery. Boonstra had some genuine problems with the rollout of the exchanges, just as many people did, but once that finally got straightened out, she ended up with coverage that was both better and less expensive than her previous plan. There’s no reason for her to be so anxious about her continued care.

But she never really learned that. For purely venal political reasons, AFP found itself a woman fighting cancer and proceeded to stoke her fears of her new health coverage in order to get a TV ad made. A TV ad. These are people who, if there’s any justice, should not be sleeping easily at night. They are swine.