Here’s the latest strangeness surrounding the disappearance of that Malaysian airliner:

As a search continued Tuesday for a Malaysian airliner that mysteriously disappeared, Malaysian military officials said radar data showed it inexplicably turned around and headed toward the Malacca Strait, hundreds of miles off its scheduled flight path, news agencies and Malaysian media reported.

….Search teams from 10 nations had initially focused their efforts mainly east of the peninsula….A high-ranking military official involved in the investigation confirmed that the plane changed course and said it was believed to 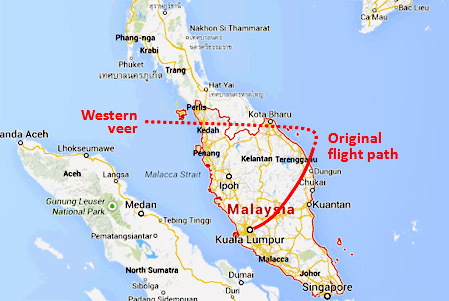 It is, of course, mysterious that the plane veered off course and turned west an hour after takeoff. But that’s not the real puzzle. The plane disappeared on Saturday. If the Malaysian military tracked it turning west into the Malacca Strait in real time, how is it that it took them three days to bother telling anyone about this? That seems damn peculiar even if things were just generally fubared at the time. Here’s another account:

The [Malaysian] air force chief did not say what kind of signals the military had tracked. But his remarks raised questions about whether the military had noticed the plane as it flew across the country and about when it informed civilian authorities.

According to the general’s account, the last sign of the plane was recorded at 2:40 a.m., and the aircraft was then near Pulau Perak, an island more than 100 miles off the western shore of the Malaysian peninsula. That assertion stunned aviation experts as well as officials in China, who had been told again and again that the authorities lost contact with the plane more than an hour earlier, when it was on course over the Gulf of Thailand, east of the peninsula. But the new account seemed to fit with the decision on Monday, previously unexplained, to expand the search area to include waters west of the peninsula.