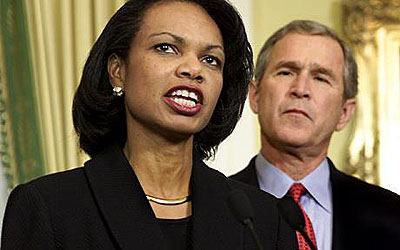 Condi Rice has joined the tut tutting brigade against Americans who aren’t crazy about fighting yet another war:

….Rice said the United States has taken a step back in conflicts including Syria, Ukraine and others. “When America steps back and there is a vacuum, trouble will fill that vacuum,” Rice said.

That’s precious, isn’t it? Maybe Rice should give some thought to the possibility that Americans aren’t weary of war, but weary of dumb, poorly fought wars. Maybe if the administration she served for eight years hadn’t launched two of the dumbest, most mismanaged wars in American history, we wouldn’t all be so weary.

As an aside, I’d point out that her administration took no military action against Iran and mounted no serious international sanctions against the regime. Her administration also did nothing when Russia invaded South Ossetia. Obama, by contrast, has doubled down in Afghanistan to try and clean up the mess left over from the Bush administration; he’s forced Iran to the negotiating table by crippling its economy; he’s participated in an invasion and regime change in Libya; he’s crippled al-Qaeda via massive drone attacks; and he’s spearheaded a growing backlash against Russia’s invasion of Crimea. And when he tried to mount an attack against Syria in retaliation for its use of chemical weapons, he was shot down not just by members of his own party, but by members of Rice’s Republican Party too.

Whatever else you can say about Obama, he’s hardly a peacemonger. His foreign policy might not be quite as blindly bellicose and unfocused as George Bush’s, but he sure isn’t shy about using or threatening military force when he thinks it’s in America’s interest. Rice should pay more attention. She might learn something.