Not that it matters. With apologies to all pro-independence Scots, I think there’s about a zero percent chance of independence winning the day in September’s referendum. As near as I can tell, virtually every national secession vote in the developed world goes the same way: initial support, which then erodes as election day draws near and everyone starts getting a more concrete idea of just how messy it’s all likely to be and how it’s going to affect them at a purely 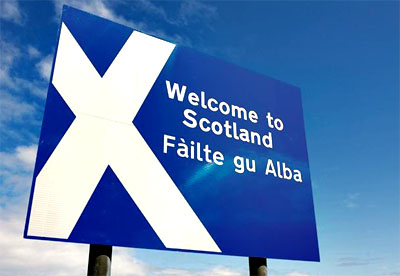 personal level. It’s true that this messiness comes partly from anti-secessionist scare tactics, but that’s inevitable. It’s just the way this stuff works. It’s a lot easier to scare people about possible losses than it is to thrill them about possible gains.

Basically, this means you need to start out with at least 60 percent of the population in favor, since you’re almost certain to lose at least 10 percent of them as the campaign unfolds, and Scotland is nowhere near that. It’s not even at 50 percent. So independence is doomed.

That’s my 5-pence view, anyway, and not worth even that much.1 Still, I’m curious about just why the pro-independence folks have been so dedicated to the idea of keeping the pound in the first place. Scotland’s about as big as Denmark, after all, and Denmark does fine with its own currency. What’s more, the last few years have vividly demonstrated the downsides of a currency union, especially for the union’s junior partners, which Scotland would surely be. So why are they afraid to simply propose that Scotland have its own currency?

Technically, one problem is that Scotland intends to join the EU if it wins independence, and the EU might insist that it can join only if it adopts the euro. That would be the worst of all possible worlds. But I’ll bet that would be negotiable. The EU would have strong incentives to let Scotland in even if it kept its own currency, and it wouldn’t be hard to invent a cultural exception of some kind based on the fact that Britain has opted out of the euro. That kind of fudge happens all the time.

So what’s the real reason? Here are a few guesses:

Or maybe it’s something else entirely that I don’t know about because I’m not Scottish.2 Anyone have a clue? Why exactly are SNP leaders so dedicated to keeping the British pound?

1Though family legend says I’m descended from Mary Queen of Scots, so there’s that.