Jonathan Bernstein notes today that Chris Christie’s poll numbers have actually risen among one particular group of voters: tea partiers. It’s a small sample from a single poll, so you don’t want 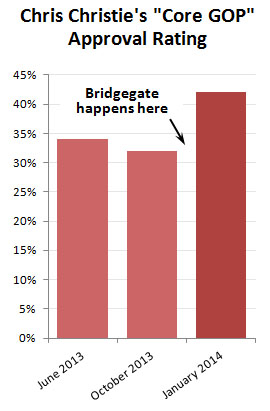 to take this to the bank until we get confirmation. And yet:

If true (and again: see caveats above), it’s a fascinating finding, confirming that for at least some non-trivial group of Republicans, all a politician has to do to win their favor is to get attacked by anyone outside of the conservative bubble.

Which is, to put it bluntly, pathetic.

But it does suggest — at least a little — the appeal of a Sarah Palin or a Herman Cain….Or, for that matter, the continuing appeal of Newt Gingrich to some conservatives despite his frequent and major deviations on public policy over the years. If the core credential for being a Real Conservative is to be attacked (by liberals? by the “neutral” news media? by prosecutors?), then demagogues, charlatans and the inept have a real advantage over responsible, competent politicians. Which really is a problem for the Republican Party, but beyond that, is an even more important problem, I would think, for actual ideological conservatives — that is, people who care about public policy and ideology, as opposed to being purely concerned with tribal allegiances.

Partisans are always susceptible to circling the wagons when one of their own is attacked. But conservatives have turned victimization into a high art over the past few years—led, as Bernstein points out, by the high priestess of grievance and victimization herself, Sarah Palin. When reports surface that make you look bad, just spin them as desperate attacks against real American values by East Coast elitists and you’re golden. After all, if the lamestream media says you did something bad, then you must actually be doing something very, very good, amirite?