Yesterday the CBO released a long-term budget analysis that included a chapter about the effect of Obamacare. Among other things, the report concluded that in 2017 and beyond, it would have the effect of reducing employment by about 2 million jobs. This produced a gigantic raft of 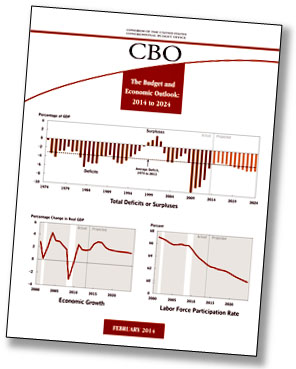 misleading headlines—some from outlets like Fox News, of course, but also from a wide variety of mainstream news sources. Among many others, Glenn Kessler of the Washington Post then explained what the CBO report really meant. Erik Wemple tells the story:

For a while [Tuesday] morning, the Internet was hopping with job-killing hype, when in fact the truth was vastly different. Obamacare’s impact, the CBO concluded, would lessen the supply of labor by encouraging certain folks not to work: “The estimated reduction stems almost entirely from a net decline in the amount of labor that workers choose to supply, rather than from a net drop in businesses’ demand for labor, so it will appear almost entirely as a reduction in labor force participation and in hours worked. . . .”

For someone approaching retirement, notes Kessler, Obamacare could well mean that they needn’t hold onto a bad job just to keep health insurance. That’s a far different dynamic from job-killing.

To illustrate just how the media had handled the CBO study, Kessler’s post included a number of headlines harvested from the Internet this morning, amid a backlash highlighting the finer points of the CBO report. In some cases, headline changes ensued; in others, news outlets stuck to their original phrasing. Below, we chronicle some of the action….

This is a debacle. I came into this story pretty cold, reading about the CBO report and then clicking on a link to take a look at it. At the time, I hadn’t read any news accounts, so I just scrolled down to the chapter on Obamacare and spent about ten minutes browsing through it. And here’s the thing: the CBO’s conclusions were crystal clear. The report explained in simple language what effect Obamacare was likely to have and what channels it worked through. It even had a handy bullet list showing the most important causes of lower employment.

And yet, lots of reporters and headline writers got it wrong. It’s crazy. This is policy 101, not some deeply technical report that you need a data sherpa to understand. Obamacare doesn’t kill jobs. It makes people more secure and thus less likely to keep a job they don’t want—or to work more hours than they need to just to stay eligible for health insurance. It also, like all means-tested programs, provides a modest disincentive for poor people to work more hours, since extra income will be accompanied by lower subsidies.

This is easy stuff. How is it that so many folks blew it? Obviously Fox News deliberately wanted to put the worst spin possible on this report. But why did everyone else go along? What’s the deal here?