Decades ago, the “hot hand” theory of sports was debunked. Massive statistical analysis showed that players in most sports went on streaks about as often as you’d expect by random chance, and when they were on a streak, their odds of making the next shot/goal/hit/etc. were no higher than at any other time. You might feel hot when you sink three buckets in a row, but that’s just the endorphin rush of 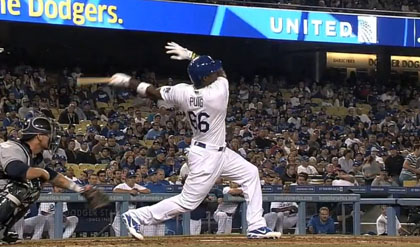 doing well. It doesn’t mean you’ll make your next basket.

But now, there are all-new mountains of data to crunch, and two teams of researchers have concluded that hot hands really do exist in at least two sports:

Baseball: Brett Green, at the Haas School of Business at the University of California Berkeley, and Jeffrey Zwiebel, at the Stanford University Graduate School of Business…controlled for variables, like the abilities of the batter and the pitcher, the stadium in which the at-bats took place, and even matchups like lefty versus lefty. And their findings, laid out in a working paper, show that a baseball player on a hot streak is batting 15 to 20 points higher than a teammate who is cold.

Basketball: Ezekowitz and his coauthors…with the help of cameras that NBA teams had installed at 15 arenas…could see that players with recent success in shooting were more likely to be taking shots from further away, facing tighter defenses, and throwing up more difficult shots….So the researchers controlled for these variables—and found what players and fans have long believed: The hot hand does exist. At least a little. According to the new research, players enjoying the hot hand are 1.2 to 2.4 percentage points more likely to make the next shot.

Hmmm. So that’s about 1-2 percentage points in both cases. And even that tiny effect is visible only after introducing a whole bunch of statistical controls that strike me as being a wee bit subjective. I suspect that if you varied your assessment of how tight the defense was or how difficult the shot was, the effect might go away entirely.

But even if it’s all legit, I have to say that 1-2 percentage points is pretty damn close to zero. And frankly, that’s still surprising. The truth is that it’s always seemed pretty logical to me that players would have hot hands now and again. But they don’t. At best, they occasionally have lukewarm hands. All the rest is just chance.

UPDATE: Via Twitter, Wertwhile suggests that this level of improvement is bigger than I’m giving it credit for:

Two percentage points is a 5 or 6% improvement typically and is about a half a standard deviation of improvement.

This is a pretty rough estimate, but it’s probably in the right ballpark (so to speak). In absolute terms, 2 percentage points still isn’t very much, but in relative terms, half a standard deviation is a fair amount. So maybe “lukewarm” is a little unfair.

However, we still have all those statistical controls to think about. I wouldn’t be surprised if these results are pretty sensitive to rather small differences in how these controls are calculated. For now, I think I’d stay on the skeptical side of the hot hands theory.