Gregory Clark writes interesting books. His last one, A Farewell to Alms, made a contentious argument about why, after a hundred centuries of zero average economic progress, growth suddenly exploded around 1800 in the tiny island of England and then spread throughout Europe and the world. Basically, Clark argues that the Industrial Revolution started in England because of “accidents of institutional stability and demography….and the extraordinary fecundity of the rich and economically successful. The embedding of bourgeois values into the culture, and perhaps even the genetics, was for these reasons the most advanced in England.”

Bourgeois values! Genetics! Rich people reproducing faster than poor ones! That was bound to piss off some people. I myself found it pretty fascinating, but I also felt like Clark was drawing some pretty spectacular conclusions from some pretty scant data. Sadly, I read Farewell to Alms on one of the original Kindle reading devices, and thus found it virtually impossible to follow. It relies heavily on tables and charts, and those rendered so poorly that I had a hard time following Clark’s argument. Shortly after that I ditched my Kindle.

I’ve since replaced it with a succession of tablets, all of which render the book just fine. But I’ve never gone back to reread it, and now Clark has a new book out, The Son Also Rises.1 His latest big idea is that status is remarkably stable over periods of centuries. Families that were well off in 1700 are, on average, still pretty well off. Basically, we 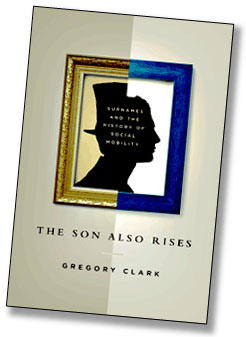 MJ: How do you measure status?

GC: I have a number of different measures for different societies. So for England, where we have some of the best data, we know everyone who went to Oxford and Cambridge from 1200 to the present. That tells us who the educational elite were in England over 800 years, and then we can ask, “What are the names that are showing up in that elite, and how persistent is their appearance in this elite?”

….We find that there is a very strong persistence of elite families at the universities. In recent years, the universities have tried to become more meritocratic and more democratic: They admit students based on performance on national exams. They don’t give any privilege to the fact that your parents went there. And public financing for tuition is now available. But what we find is that elite families persist at Oxford and Cambridge at the same rate as they did in the 19th century. It hasn’t managed to change the rate of social mobility.

Clark uses this strategy of following family names in other countries as well, and comes to similar conclusions. Is this legit? Are family names enough to figure out who’s going up and who’s going down? I have my doubts, but I haven’t read the book. And I have to say that my personal experience is a data point in favor of Clark’s thesis. Many years ago I got interested in genealogy and started digging up my family tree. Roughly speaking, I managed to go back about 200 years through most of my branches. And one of the things that intrigued me was just how homogeneous it all was. Some of my ancestors were better off than others, but mostly within a pretty narrow band. As near as I can tell, none of them were destitute and none of them were rich. They were small farmers, shopkeepers, linen drapers, sign painters, electricians, and stonecutters. Over seven or eight generations, social mobility has been pretty close to zero.

So maybe there’s something to this. I’ll let you know what I think if I end up reading the book.

1Yes, he’s apparently stuck on Hemingway puns. This is undoubtedly a rich vein for economists. Next up: To Have and Halve Not. Followed by For Whom the Swell Toils and The Gold Plan and Me.