Jon Cohn wonders how it is that attitudes toward same-sex marriage have changed so rapidly:

The change may seem inevitable now, but it didn’t always. And it’s happened with breathtaking speed….It’s easy to assume the change represents nothing more than a generational shift….[But] pollsters have found that, over time, support for same-sex marriage has risen even within generations.

One likely reason for this, according to most social scientists, is the contact theory. As more people realize that they have a gay neighbor or friend or family member, the reality of that relationship crashes into—and destroys—their stereotypes and preconceptions….But even that explanation is inadequate….The real mystery here, or at least a big part of it, is what suddenly made the environment more 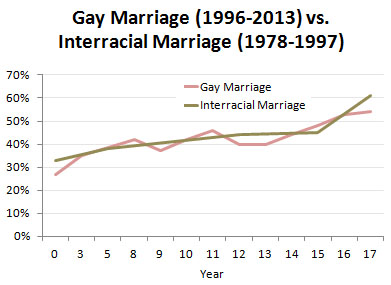 hospitable? At this point, social scientists admit, they have no answers they can verify—only theories that seem roughly to fit the facts.

Everything Cohn talks about in his post could apply to interracial marriage too: generational changes, network effects, popular culture, and so forth. Nevertheless, it’s worth noting that public attitudes toward gay marriage changed at about the same rate as attitudes toward interracial marriage. With the right pressure and the right tailwinds, this is simply how fast cultural change can happen in our modern media era.