Via Tyler Cowen, here is a chart from Kevin Erdmann that shows raw teen employment figures during periods after the minimum wage was increased. What it shows, roughly speaking, is that in nearly every case, the trend rate of teen employment declined when 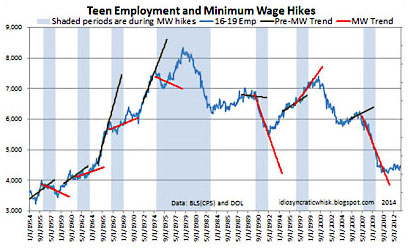 a minimum wage hike went into effect. He asks: “Is there any other issue where the data conforms so strongly to basic economic intuition, and yet is widely written off as a coincidence?”

Sure, maybe. But it doesn’t seem likely. In terms of short-term effects, what I mostly see are employment declines in 1973, 1979, 1990, 2000, and 2007. And guess what? Those are the dates of the last five recessions in the United States. What’s more interesting about this is that teen employment recovered from its immediate decline during the Carter and Clinton years, but didn’t recover during the Reagan and Bush years. (And probably not during the Obama years either, though the final results aren’t in yet.) Why? That’s an intriguing question.

Bottom line: Teen employment has dropped substantially since about 1980. But during that time the real minimum wage has declined from $8 to $6 and then gone back up to a little over $7. Maybe there’s a correlation there, but it sure isn’t easy to see. Whatever’s happening, the minimum wage seems to be a pretty small part of it.