I’ve been writing a bit less lately about Obamacare, and there’s a reason for that: It’s a done deal. It’s not going to be repealed; the website woes have mostly been fixed; and we’re now at a point where we’re simply not going to know how it works out until it’s been up and running for a while. Obsessing over every interim report and every Republican screamfest doesn’t make much sense. We just have to wait and see.

For example: the latest bit of manufactured Republican hysteria concerns an interim report showing that 2.1 million people signed up on the exchanges through January 1 (not bad, really), but only 24 percent of them are young people. That’s potentially a problem, since insurers rely on a certain mix of old and young when they set their premium levels. Older people tend to be sicker, so if there are more older people than they expect then they’ll have to raise premiums.

As it happens, this is almost certainly not a real problem. Younger people tend to wait longer to sign up for insurance, and that 24 percent number will most likely rise through the end of the year. But 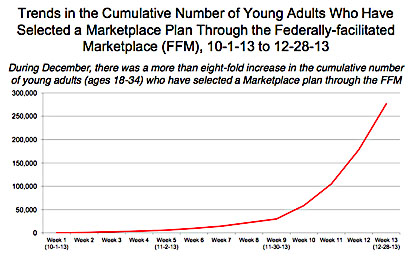 what if it doesn’t? As it turns out, nothing much will happen. Ezra Klein explains:

The risk of a “death spiral” is over. The Kaiser Family Foundation estimates that if the market’s age distribution freezes at its current level — an extremely unlikely scenario — “overall costs in individual market plans would be about 2.4% higher than premium revenues.” So, in theory, premiums costs might rise by a few percentage points. That’s a problem, but it’s nothing even in the neighborhood of a death spiral.

There are additional details that make this even less of a problem than that, but who cares? That’s enough. The 24 percent number is extremely likely to go up; the impact will be very small if it doesn’t; and there are transitional policies that smooth out any problems in the first few years anyway. Bottom line: Republicans are trying to make hay with this, but that’s just Republicans being Republicans. You can safely ignore them. There’s really nothing much to worry about here.