The mayor of Hoboken, who was apparently a big fan of Chris Christie for his first few years in office, went public today to say that Christie’s office told her last year that Hoboken wouldn’t get any Hurricane Sandy relief funds unless she approved a 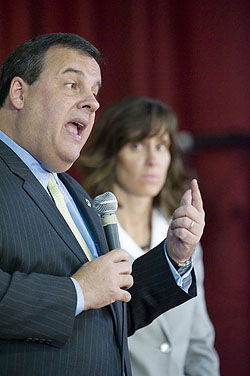 redevelopment project being managed by some pals of Christie:

The mayor, Dawn Zimmer, hasn’t approved the project, but she did request $127 million in hurricane relief for her city of Hoboken….[On May 10, 2013] Zimmer got a call from the Lieutenant Governor, Kim Guadagno, who wanted to come to town to do an event at a ShopRite to spotlight businesses that had recovered from the storm.

On May 13, Guadagno and Zimmer met at the Hoboken ShopRite. That is where, Zimmer said, Guadagno delivered the first message about the relief aide.

Zimmer shared this diary entry which she said she wrote later that day. “At the end of a big tour of ShopRite and meeting, she pulls me aside with no one else around and says that I need to move forward with the Rockefeller project. It is very important to the governor. The word is that you are against it and you need to move forward or we are not going to be able to help you. I know it’s not right — these things should not be connected — but they are, she says, and if you tell anyone, I will deny it.”

The second warning, according to Zimmer, came four days later. She and Constable, who now led Christie’s department of community affairs, were seated together on stage for a for a NJTV public television special on Sandy Recovery.

Again, Zimmer provided this diary entry from May 17, which she said captured the incident.

Are Christie’s Democratic enemies helping orchestrate this? Of course they are. Does that matter? Not even slightly. All that matters is whether it’s true. If it is, I’d presume there should be two big pieces of evidence to support it:

We’ll have to wait and see about these two things. In the meantime, the chum is in the water and the sharks are circling Christie. He’s obviously a guy who plays political hardball, and now that Bridgegate has weakened him, we can expect to see a lot more people telling stories like this one. In the past they wouldn’t have hurt him too much thanks to his carefully manicured reputation for being tough (but fair!) with people in order to get things done in a state that desperately needs someone unafraid to kick all the right asses. But Christie isn’t getting the benefit of the doubt anymore. If this story turns out to be true, it’s just one more nail in the presidential coffin.