Matt Yglesias takes a look today at the trajectory of employment since the Great Recession started. He finds that among older workers, men have done slightly better than women. Among the middle aged, men and women have done about the same. But among the young, men have done 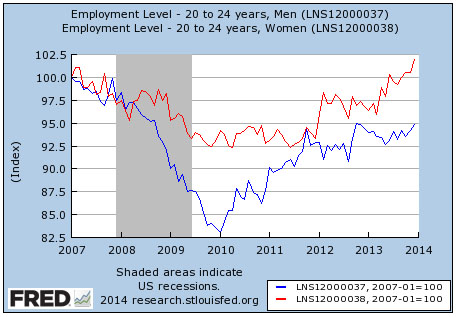 All told, it’s very much an End of Men scenario—with the particularly striking fact being that you see the end of men more strongly in the younger cohorts. The population of people over the age of 55 is both large and growing, so the experience of older people carries a lot of weight in national aggregates. But the younger you look the more you see men’s disemployment as a theme. For younger workers we really are slouching toward gender equity—we’re just doing it more by men becoming worse off than by women becoming better off.

This is yet another lesson in disaggregation. If you take a look at broad numbers, you can often miss the most important trends. The fact that young men have been so hard hit by the Great Recession is something you might miss if you just looked at broad aggregates. But it’s important, because we know that a person’s lifetime employment prospects are heavily influenced by the first few years in the job market. What’s happening to young men today is something that’s likely to ripple forward for decades.1

1Until the robots put us all out of work on a gender-equal basis, that is.