Everyone’s favorite timewaster of the past couple of days has been the New York Times’ online dialect map. Answer 25 questions and it will tell you where you grew up. My results were disappointingly vague. Lots of people reported that the app practically located the city block they came from, but in my case it didn’t even get the right part of the state. I’ve spent my entire life within a radius of about 20 miles centered on Orange County, but the app thinks I come from northern California: 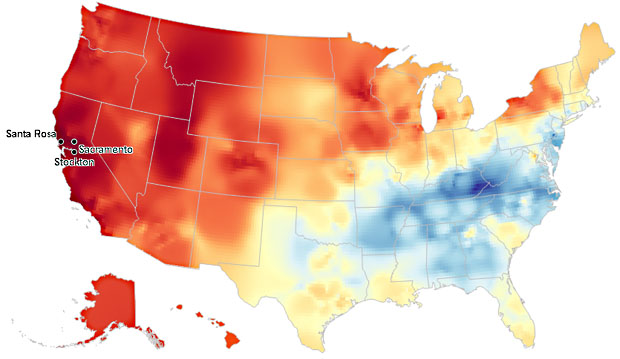 I had trouble with several of the questions. The freeway/highway distinction had a couple of answers that seemed OK. I refer to large vehicles on highways as big rigs, trucks, and semis fairly interchangeably. I’m fairly agnostic between yard sale and garage sale, as well as between drinking fountain and water fountain. But I took the test several times to see if answering these few questions differently made a difference, and it didn’t. I kept coming up as a northern Californian.

So I dug in further. Which question was IDing me wrong? After plowing through the test about a dozen times giving different answers to one or two questions at a time, I finally figured it out. It was this one: “What do you call the small road parallel to the highway?” I think of this as a frontage road, but when I switched to service road, the app pegged me with eerie precision: 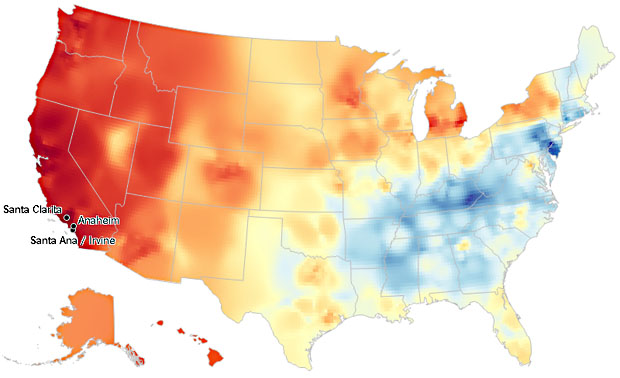 So what’s going on? The truth is that here in Orange County we don’t really have roads like this, so I don’t call them anything. The only time I see them is when I’m traveling, usually in a car going north on I-5. Once you get up into the San Joaquin Valley, there are signs for these roads all over the place, and they’re always called frontage roads. Since that’s the only exposure I have to them, I call them frontage roads and thus peg myself as a northern Californian.

I’m pretty sure there’s more to it than just this, but since the test rotates questions it’s hard to consistently hold every variable constant but one in order to get clean results. As near as I can tell, frontage road reliably places me north of Bakersfield, but service road occasionally does too depending on how I answer some of the other questions. Most of the time, though, service road plus my natural answers to everything else places me solidly in Southern California.