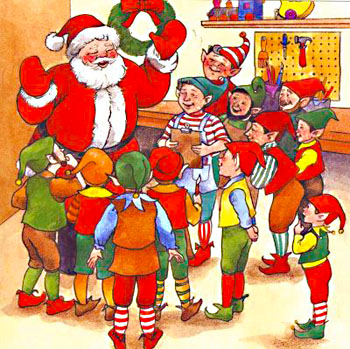 Dean Baker writes today that the Washington Post should be less worried. Their writers seem to think that eventually robots will take away all our jobs, but their editorial page is worried about bankrupting the country via spending on Social Security and Medicare. But you really can’t have both. If robots are beavering away producing everything we could possibly desire, then national bankruptcy is hardly a worry. Except, of course, for this:

There can of course be issues of distribution. If the one percent are able to write laws that allow them to claim everything the robots produce then they can make most of us very poor. But this is still a story of society of plenty. We can have all the food, shelter, health care, clean energy, etc. that we need; the robots can do it for us.

Yep. This is the issue. For all practical purposes, you can think of the elves in Santa’s workshop as a bunch of robots. As near as I can tell, they work for free, they’re insanely productive, and they produce as much stuff as Santa wants them to. So how is all this bounty distributed? Santa is smart enough to have figured out that capitalism won’t really work in a situation like this, so he’s adopted what’s basically a centrally-planned Marxist system: he decides who’s been naughty and who’s been nice, and then distributes gifts accordingly.

That might not quite work for our robot-filled future, but something like it will. Distribution, as John Stuart Mill pointed out more than a century ago, is really the most important question in economics. In the future, it will only get even more important.