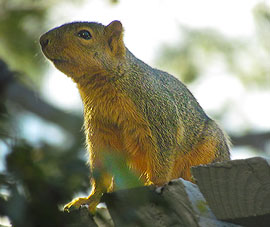 Gizmodo tells us today that squirrels were first introduced into urban parks by Philadelphia in 1847. Everyone loved it and the idea soon spread:

Central Park led the way in the second wave of squirrels introduced into American cities….Feeding the squirrels became a past time during these years, and was eventually seen by naturalists and conservationists as a way to help humans learn how to better treat animals….So next time you see a squirrel in the park, drink it in. These little critters were put there for your entertainment. But perhaps more importantly, they were put there to remind us of how man and nature must get along, even if it takes a little effort.

The little critters are everywhere now. One in particular has taken up residence in my backyard for some reason. I don’t think there’s anything to eat there, so I’m not sure what’s going on. Is he burying acorns there or something? It would be a pretty good spot, I suppose, since Domino doesn’t go outside much anymore and wouldn’t know what to do with a squirrel if she saw one. Especially in the winter, she much prefers burrowing under a nice, warm quilt. Speaking of which, today’s sample is another double Irish chain design, twin-sized, machine pieced and machine quilted. It nursed me back to health earlier this week when I headed downstairs during a bout of insomnia, so perhaps it has wonderful medicinal qualities too. Who knows? 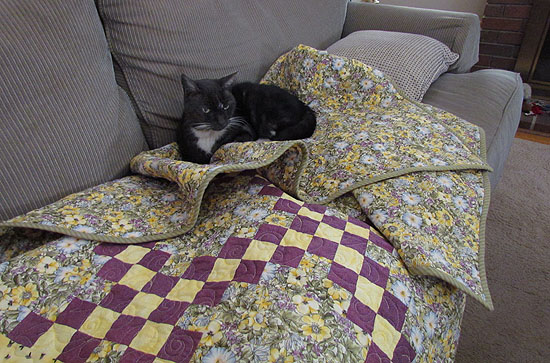