Via Tyler Cowen, Francis Fukuyama diagnoses three things that are driving the decay and sclerosis of the American political system:

The first is that, relative to other liberal democracies, the judiciary and the legislature (including the roles played by the two major political parties) continue to play outsized roles in American government at the expense of Executive Branch bureaucracies….Over time this has become a very expensive and inefficient way to manage administrative requirements.

The second is that the accretion of interest group and lobbying influences has distorted democratic processes and eroded the ability of the government to operate effectively.

….The third is that under conditions of ideological polarization in a federal governance structure, the American system of checks and balances, originally designed to prevent the emergence of too strong an executive authority, has become a vetocracy….We need stronger mechanisms to force collective decisions but, because of the judicialization of government and 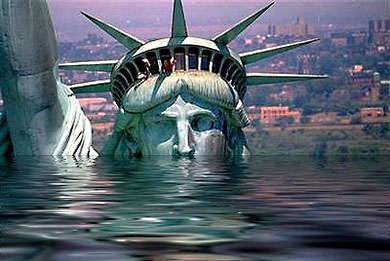 the outsized role of interest groups, we are unlikely to acquire such mechanisms short of a systemic crisis. In that sense these three structural characteristics have become intertwined.

I’m not entirely persuaded about Fukuyama’s second point. There’s not much question that lobbying has exploded over the past half century, nor that the rich and powerful have tremendous sway over public policy. But do powerful interest groups really have substantially more influence in the United States than in other countries? Or do they simply wield their power in different ways and through different avenues? I’d guess the latter.

Nonetheless, even if America’s powerful are no more powerful than in any other country, the fact that they wield that power increasingly via Congress and, especially, the judiciary might very well make their influence more baleful. I’m reminded of an argument from labor attorney Thomas Geoghegan along similar lines. Obviously he allocates blame a little differently than Fukuyama does, but he still concludes that the explosive growth in litigation to solve problems has had pernicious consequences. In the case of workplace complaints, for example, quick and simple arbitration has been largely replaced by scorched-earth court proceedings:

It is not so much about conduct as state of mind. The issue is no longer whether the employer fired the plaintiff for “just cause,” whatever that might now mean in a world of “employment at will.” What the plaintiff must do is show that the employer acted to harm him.

….In post-union America, this is the legal system we now have. It forces us to cast legal issues in the most subjectively explosive way, i.e., “racism,” “sexism,” to get around the fact that we no longer can deal objectively with “just cause.” Do I regret I am part of it? Yes. Are my clients often full of hatred? Yes.

In the same way that financialization has a corrosive impact on a country’s economy and its ability to produce useful goods and services, you might call this the judicialization of governance, which erodes our country’s ability to produce useful, broad-based, widely accepted policy. The best evidence of this is also the most obvious: Over the past few decades, we’ve gotten to a point where more hostility and bitterness are expended over the appointment of judges than over virtually any other legislative or executive priority.

As for Fukuyama’s “vetocracy,” that’s a sore point of longstanding, and one that’s become worse and worse over the past decade. Fukuyama puts it this way:

The United States is trapped in a bad equilibrium. Because Americans historically distrust the government, they aren’t typically willing to delegate authority to it. Instead, as we have seen, Congress mandates complex rules that reduce government autonomy and render decisions slow and expensive. The government then performs poorly, which perversely confirms the original distrust of government. Under these circumstances, most Americans are reluctant to pay higher taxes, which they fear the government will simply waste. But while resources are not the only, or even the main, source of government inefficiency, without them the government cannot hope to function properly. Hence distrust of government becomes a self-fulfilling prophecy.

The whole essay is worth a read. And I congratulate Fukuyama for not even pretending to write a final paragraph with potential solutions. Instead, his final line is, “So we have a problem.” Indeed we do.